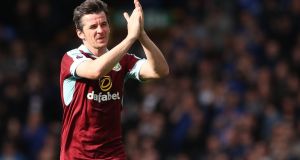 Joey Barton: was suspended for 18 months after having been found to have placed some 1,260 bets between 2006 and 2013. Photograph: Martin Rickett/PA

The FAI has no plans, it would seem, to follow the FA’s lead by giving up sponsorships from bookmaking firms with the association declining to comment on the announcement made by its English counterpart in relation to the ending of its multimillion pound deal with Ladbrokes.

Increasingly concerned by repeated accusations of hypocrisy, most notably by players found to have breached its rules on gambling, the English association had instigated a review of its position three months ago and announced on Thursday that it had reached agreement with the betting firm on the early termination of a four-year deal worth a reported €4.5 million annually. The arrangement still had three years to run.

“At the May FA board meeting, it was agreed that the FA would end all sponsorships with betting companies starting from the end of the 2016-17 season,” the organisation said in a statement.

“The decision was made following a three-month review of the FA’s approach to it as a governing body taking betting sponsorship, whilst being responsible for the regulation of sports betting within the sport’s rules.”

That apparent conflict of interest had been highlighted by recent cases relating to high-profile players, most obviously Joey Barton who was suspended for 18 months after having been found to have placed some 1,260 bets between 2006 and 2013.

Barton has been quick to seize on the apparent contradiction between the association policing players’ gambling habits whilst also helping promote the business of a prominent bookmakers.

“What are the FA going to do?” he said in a Sunday Times interview earlier this month, “march into Ladbrokes and say: ‘Show us everyone who’s had a bet on this game...’ Ladbrokes are going to say: ‘Eff off, we pay you £10m (sic) a year , keep your mouth shut.’ Do the FA not understand that’s hush money?”

Other players to have suffered major problems with gambling down the years include Paul Merson, Keith Gillespie and Dietmar Hamann with the German having admitted to losing around €350,000 on a single bet although that was on cricket rather than football.

The issue is believed to be far more widespread, however, and another player to have lost substantial sums, the former Stoke star, Matthew Etherington, had urged the key organisations involved in running the game to do more.

“It’s very hard and complex, but everyone needs to take a little bit more responsibility,” he said, “the PFA [Professional Footballers’ Association], the players, the FA and the gambling organisations themselves.”

Clubs might well have made that list too with every single one of the Premier League’s top flight sides having at least one betting “partner” and 10 of them wearing the name of a bookmaker or online casino across the front of their shirts.

Those shirt deals alone were worth almost €40 million in total last season although the combined amount earned by the 20 clubs is substantially more.

The FA’s move now will cost it around €13.5 million over three years although the organisation is in decent shape to take the hit having turned over around €420 million last year with just over €85 million of that coming from sponsorships and licensing deals.

It is possible the departure of Ladbrokes will simply free up space for another backer on the organisation’s commercial roster.

The FAI, which tends to have revenues of closer to €40 million per annum, also has a deal with Ladbrokes while it brokered the sponsorship by Trackchamp of the Airtricity League which involves the firm broadcasting games via its website and providing performance data to clubs as part of a four-year deal worth around €120,000 per season. The arrangement, which required would -be viewers to have an active account with the firm, has been criticised both by clubs and former players.

It is also, apparently, still investigating allegations of match fixing relating to Athlone Town which were triggered by reports of highly unusual betting patterns on the international, mainly Asian markets on one of the club’s games earlier in the season.

1 St Michael’s conveyor belt showing no signs of slowing down
2 Leinster qualify as top seeds with Benetton win
3 Gerry Thornley’s guide to the Champions Cup pool permutations
4 Munster mood will be determined before kick-off
5 Welcome to Iten in Kenya – home of champions and cheats
Real news has value SUBSCRIBE
Crossword Get access to over 6,000 interactive crosswords