Jesus doubles up as City hand Ancelotti his first defeat 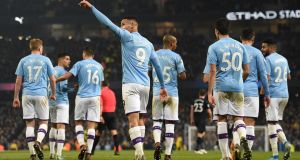 Manchester City end the festive period with nine points from their four league games after a pair of Gabriel Jesus goals handed a first defeat to Everton’s Carlo Ancelotti. Everton held out until early in the second half but ultimately could not deny Pep Guardiola’s champions who were as relentless in hunting the win as ever.

City’s sole reverse of the Christmas programme came last Friday at Wolves in a result that, surely, killed any hopes of catching Liverpool. Instead, their FA Cup defence begins on Saturday, before next week’s EFL Cup semi-final encounter with Manchester United ahead of February’s restart of the Champions League: all are competitions which City can now focus intently on.

Guardiola made five changes for what was a sixth game in 17 days. While he gave Phil Foden a second league start Claudio Bravo’s retention was notable as the hardly reliable goalkeeper played a second successive time due to Ederson being ill following a one-match suspension. The last time Bravo faced Everton – in January 2017 – he allowed four goals from four shots. And he would add to the count here by being culpable for Everton’s consolation, the Chilean lining up behind a 3-4-1-2 that had two holding midfielders – Rodri and Fernandinho - in defence.

Carlo Ancelotti initially made the same number of changes as his opposite number before Bernard suffered a cut leg in the warm-up, so Tom Davies was drafted in for the Brazilian.

The opening period proved low grade. An error from Ilkay Gündogan had Guardiola muttering and Davies pouncing as Everton transformed defence into an attack that ended with Gylfi Sigurdsson flipping the ball to Seamus Coleman: his effort was tipped behind for a corner by Bravo.

When Gündogan later tried his own chip into Riyad Mahrez Jordan Pickford was less sure: he dropped the ball and Everton were relieved to clear.

João Cancelo has struggled for form since signing yet he came close to creating the opener for Foden only for VAR to rule Mahrez offside. Ancelotti had a consoling word for Guardiola who smiled at his Everton counterpart but he still embarked on animated chat with Kevin Friend, the fourth official.

The next time VAR became involved it was confused as it checked for a possible penalty despite Mahrez seeming to be flagged for offside or handball or both. The spot-kick was not given but the contest had been disrupted and, inevitably, the anti-VAR chants had a second airing in a matter of moments.

Both benches were unhappy at this stage with their respective players’ output. For Guardiola it was Kevin De Bruyne and Foden momentarily losing their deft touch; for Ancelotti it was his men’s sluggish pace and an insistence on passing back to Pickford, instead of looking forward for options.

Better from City was a Mahrez swivel and shot, then a Gündogan effort which also warmed Pickford’s fingers. Really, though, the entertainment level was down in a sign perhaps of the Christmas and New Year slog. Another was found in the number of offsides committed by tired players – Mahrez a particular perpetrator.

Still, City had dominated the ball and when they do they often prosper. Foden’s lack of regular action meant he was fresh and it was his snap-shot – gathered by Pickford – that was the first half’s last real threat on goal. As the break neared Mahrez had two clearer chances but steered the first wide and seemed surprised to receive the second.

The average fare continued after the interval. Benjamin Mendy sold De Bruyne short so he had to stick a boot out and watch the ball sail into no-man’s land much to Guardiola’s chagrin. Next Bravo punted possession straight out when Cancelo was the target. Then, though, came a moment to remember. Gündogan slipped a pinpoint pass into Jesus who in an instant had beaten Pickford with a finish that was the Brazilian’s 13th goal this season.

From the restart Everton claimed a corner – to Guardiola’s supreme annoyance – but despite a second one following when Dominic Calvert-Lewin’s header deflected out there was no equaliser.

The contest had opened up. Suddenly Eric García was curving a ball along the left to Mahrez as City upped pace and so opportunity. And now they had a second strike and this was straight from the Guardiola playbook.

De Bruyne passed to Foden who found Mahrez, who in turn played in Jesus and he calmly finished low past Pickford. City were coasting but then Bravo added to the catalogue of howlers by passing direct to Richarlison. From here there was an inevitability about how Theo Walcott – a recent substitute – took aim, the ball skimmed off Mendy, and there was Richarlison to bundle home. Despite a late rally from the visitors City ended with a deserved three points. – Guardian