Zlatan: ‘This was my 32nd trophy and I’m super happy’ 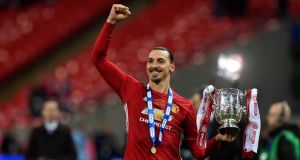 Zlatan Ibrahimovic believes winning trophies gets better with age after firing Manchester United to success in the EFL Cup final.

The 35-year-old striker scored twice in the 3-2 victory over Southampton – including a late winner – to give United manager Jose Mourinho his first trophy since taking over at Old Trafford.

“It was nice, it was very nice,” the former Sweden international told Sky Sports. “This is a team effort, this is not about an individual. This is collective.

“This is what I came for, I came to win and I’m winning so I just have to keep going because the more I win, the more satisfied I get.

United looked on course for a straightforward victory at Wembley following Ibrahimovic’s free-kick and a strike from Jesse Lingard, but goals either side of half-time from Manolo Gabbiadini drew Saints level.

Ibrahimovic then grabbed the winner three minutes from time as Mourinho lifted the trophy for a record-equalling fourth time as a manager.

The Portuguese boss admitted Southampton were superior for much of the final and praised Ibrahimovic for making the difference.

He now joins Brian Clough and Alex Ferguson as the only managers to have won four League Cups.

“I think he [Ibrahimovic] won the game for us because he was outstanding,” Mourinho said.

“In a match where our opponents were better than us for long periods of the game, they deserved to go to extra-time, they did not deserve to lose over 90 minutes. He made the difference and he gave us a cup.

“It was a game that I was feeling the difficulty, I want to pay the homage Southampton deserve and the only thing I can say is we have the cup in our hands but probably we should be now playing extra-time.”