Ibrahimovic says ‘this is what I came for – to win. And I am,’ after lucky win for United 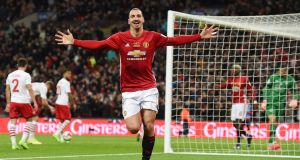 Jose Mourinho watched Zlatan Ibrahimovic snatch what he admitted was a slightly undeserved League Cup final victory against Southampton and he joked that Manchester United’s supporters ought to camp outside the striker’s house to persuade him to sign on for another season at the club.

United led at Wembley through goals from Ibrahimovic and Jesse Lingard before Southampton’s new signing, Manolo Gabbiadini, hit back with two goals of his own. Gabbiadini, who joined at the end of January from Napoli for €17 million, had seen an 11th minute effort wrongly disallowed for offside.

Ibrahimovic deepened Southampton’s sense of regret and injustice with the winning goal on 87 minutes and it brought his tally for the season, since his arrival as a free agent from Paris Saint-Germain, to 26 in all competitions. It helped Mourinho become the first United manager to secure a trophy in his first season at the club, and he has now equalled Brian Clough and Alex Ferguson with four League Cup triumphs.

Ibrahimovic has been offered a one-year extension to his contract at Old Trafford but he has yet to sign it. “If needed, United fans can go to the door of his house and stay there all night,” Mourinho said. “If needed, they will go, for sure.

“To get what we need for him to stay one more year. I honestly think he won the game for us because he was outstanding in a match where our opponents were better than us for long periods – and in a game where I think Southampton deserved to go to extra time. They didn’t deserve to lose in 90 minutes.

“I was Zlatan’s manager [at Internazionale] and I know the potential of him. But it is all down to him. He came to England at 35 because he felt ready. Only a silly player comes to England at that age, with the successful career he had had, if he thinks he cannot do it.”

“One day Zlatan decided to (leave me and Inter Milan to join) Barcelona, I was very sad, but I did nothing to try to stop him to go, so I don’t beg for players.

Ibrahimovic said: “This is what I came for – to win, and I am winning. The more I win, the more satisfied I get. You appreciate it more, the older you get. Wherever I have gone, I have won. I think this is trophy number 32 for me. This is what I predicted. To many, I could not do it. I keep doing it.”

Mourinho suggested that relief was most prominent among his emotions because he was “more afraid” of this type of final against a team who were clear pre-match underdogs. He also said Southampton’s greater freshness had been apparent. It was only their second game since the weekend of February 4th-5th; it was United’s fifth in the same period.

“The fuel was in their legs, not ours,” Mourinho said. “If we go to extra time, we would be in trouble.”

“I’m obviously very happy with the victory, with the fact that I did it four times, the same as Mr Clough, and with a chance to win for a fifth time.

Despite looking glum, Mourinho reiterated: “I am very happy. I always try to put myself in the secondary position – it’s important for the fans, the club, the players – but it’s also important for me.

“The reality is that we want more: my contract is long, I have two more years with this one, so hopefully I can win more. This season I know it’s difficult, but the reality is we have to try to fight for more.”

Mourinho said Southampton manager Puel had “a reason to be really sad and disappointed. His team did fantastic work, deserved extra time, and to lose in the 87th minute gives very little time to try to react.

Puel was proud of his players but upset at the disallowing of what would have been Gabbiadini’s first goal. “I would like the video technology in the future for these situations,” the Southampton manager said. “But sometimes you get bad decisions. It’s very hard to lose this game. We were unlucky. It’s very cruel.”

“It’s important to accept this but I am disappointed for the players and for the fans . . . Before the third goal we had the best situation, the best opportunities. –(Guardian service/PA)