Jack Harrison rescues a point for Leeds at Millwall 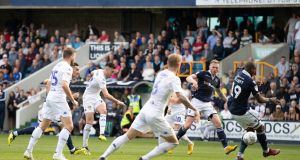 Jack Harrison netted a late equaliser as leaders Leeds preserved their unbeaten start to the Championship season following a hard-fought 1-1 draw with Millwall at the Den.

Jed Wallace broke the deadlock 10 minutes into the second half when he got on the end of Jake Cooper’s flick-on to convert in off the woodwork.

But Harrison, on loan from Manchester City, levelled with a low shot into the bottom corner with a minute remaining before Tom Elliott headed against the inside of the post for the Lions in stoppage time.

Middlesbrough, who began the day sitting second only on goal difference, suffered their first defeat as they went down 1-0 to Norwich at Carrow Road.

Teemu Pukki, who scored two winners for Finland on international duty, opened the scoring in the 58th minute after Emi Buendia’s cross – the first goal Boro had conceded in the league for 561 minutes.

Norwich thought they had been reduced to 10 men with 15 minutes left when Timm Klose was shown a second yellow card only for referee Andy Davies to reverse his decision and awarding City a free-kick for offside after consulting with his assistant.

Brentford took advantage of Boro’s slip-up as they moved into second place after beating 10-man Wigan 2-0 at Griffin Park, where they have a 100 per cent record.

In-form Neal Maupay grabbed his sixth goal in as many games when he converted Said Benrahma’s cross from close range in the 24th minute.

Wigan had Sam Morsy sent off in the 58th minute after a clash of heads with Yoann Barbet, who played a part in Brentford’s second when his shot was blocked on the line and Maupay (63) slammed home his second.

Bristol City are now third after Marley Watkins headed in an 81st-minute winner as they beat Sheffield United 1-0 at Ashton Gate.

Watkins got on the end of a delivery from Republic of Ireland midfielder Callum O’Dowda to make it four wins in a row for the Robins and bring an end to the Blades’ run of four successive victories.

Manager Frank Lampard was sent to the stands as Derby’s three-game winning run came to an end after they lost 1-0 to Rotherham at New York Stadium.

The Rams had Tom Lawrence dismissed for a bad foul on former Dundalk man Richard Towell in the 58th minute and five minutes later the Millers made the numerical advantage count when Galwayman Ryan Manning converted from the penalty spot after Kyle Vassell was adjudged to have been fouled.

Lampard then saw red as frustrations boiled over.

Swansea climbed into sixth after a goalless draw at home to Nottingham Forest, who drew for the fifth time in seven league games.

Goals from Marco Matias and Barry Bannan helped Sheffield Wednesday hit back from 2-0 down to draw 2-2 with Stoke, for whom Benik Afobe had netted twice in the first 22 minutes.

Reading moved off the bottom after a 3-2 win at Preston, Leandro Bacuna scoring an 81st-minute winner, while goals from Jarrod Bowen and Jackson Irvine helped Hull beat Ipswich 2-0 and end a run of six successive home defeats in all competitions.

QPR made it three wins in a row as they won 2-1 at Bolton, who avoided administration this week. Luke Freeman and Eberechi Eze scored before Josh Magennis’s consolation.