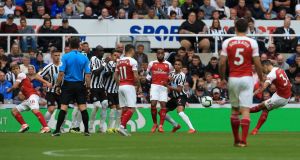 Mesut Özil scored his first goal of the season as Arsenal shook off a slow start to cruise to a third successive Premier League victory at Newcastle.

The former Germany international, who has found himself under the spotlight in recent months, cemented a 2-1 win at St James’ Park with his 58th-minute strike nine minutes after Granit Xhaka had opened the scoring with a fine free-kick.

However, if Arsenal’s second-half display was worthy of the points, the Magpies were left to reflect upon what might have been having enjoyed the better of the first without being able to find the quality they needed to get past Petr Cech, who was eventually beaten at the death by Ciaran Clark.

They have now taken just a single point from their opening five league games, four of which have been against Tottenham, Chelsea, Manchester City and the Gunners, leaving fans protesting vociferously over Mike Ashley’s ownership increasingly frustrated at events on the pitch too.

Where Rafael Benitez had adopted a safety-first approach against the big guns earlier in the season, he was more progressive this time around.

Central defenders Federico Fernandez and Jamaal Lascelles, who became a father for the first time in midweek, both won headers from set-pieces inside the visitors’ penalty area amid an early flurry but the Magpies were unable to profit on either occasion.

It took the Gunners 18 minutes to mount an attack of note when Matteo Guendouzi’s teasing cross flew across Martin Dubravka’s goal after good set-up play by Aaron Ramsey and Alexandre Lacazette, but the home side almost took the lead three minutes later.

Sokratis got central defensive partner Shkodran Mustafi out of trouble when his slip let Jacob Murphy in, but after the resulting corner had been recycled by DeAndre Yedlin, Cech had to turn away Murphy’s diving header.

Arsenal started to come into the game as the half wore on with Lacazette and Pierre-Emerick Aubameyang stretching the home defence, although Ramsey blazed a 33rd-minute cross high over after being played in around the corner by Lacazette.

Unai Emery sent on Lucas Torreira for Guendouzi at the break and he gave his side fresh impetus in the opening minutes of the second half, playing a part as they took a 49th-minute lead.

Aubameyang was adjudged to have been fouled by Fernandez 25 yards out, handing Xhaka the chance to curl a left-foot free-kick past Dubravka and inside the post.

The Gunners assumed complete control as the Magpies visibly deflated and they extended their lead within nine minutes when, after Lacazette’s shot had been blocked, Ozil steered the rebound past the helpless Dubravka.

Aubameyang could have put the result beyond doubt within minutes, but dragged his effort wide of the far post with Newcastle in tatters.

Benitez sent on Kenedy and Yoshi Muto in an effort to rescue the game, but it was Clark who reduced the deficit with a stoppage-time header from Fernandez’s cross.