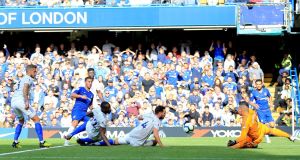 Chelsea climbed to the top of the Premier League table after Eden Hazard’s hat-trick inspired Maurizio Sarri’s side to a 4-1 comeback victory over Cardiff.

Cardiff took a shock lead in the 16th minute at Stamford Bridge when Sol Bamba bundled in from close-range after Sean Morrison had headed the ball into his path.

Chelsea pulled themselves level in the 37th minute when Hazard burst up the field before firing into the bottom corner from just outside the area.

Hazard was on the scoresheet again two minutes before the break, rifling home after good work from Olivier Giroud.

And the Belgian forward completed his hat-trick from the penalty spot in the 80th minute after Willian had been fouled in the box, before the Brazilian star put the icing on the cake when he unleashed a fierce strike into the top corner two minutes later.

Ryan Fraser scored twice and made another as Bournemouth continued their impressive start to the Premier League season by blitzing 10-man Leicester 4-2 at the Vitality Stadium.

The Scottish winger produced two composed finishes to put the Cherries in control and, after Joshua King’s penalty secured a three-goal half-time lead, set up a fourth for Adam Smith.

A forgettable afternoon for the Foxes, who had captain Wes Morgan sent off at 3-0, ended on a more positive note as a penalty from James Maddison and Marc Albrighton’s header halved the deficit late on.

Bournemouth have now taken 10 points from their opening five games, while the visitors slipped to a second successive defeat.

Zaha, the game’s outstanding talent, underlined his importance to Roy Hodgson’s side with a moment of magic to seal their first league victory since the opening day.

Palace’s talisman, back in the starting line-up after a groin injury, tricked his way into the penalty area seven minutes before half-time and curled the ball into the top corner.

The Londoners rode their luck as Huddersfield chased an equaliser throughout the second half, but they held on and extended the hosts’ winless start to the league campaign to five matches.

1 Sideline Cut: Vignette shows why Bird is the true shark in The Last Dance
2 Brendan Rodgers says he was ‘really knocked’ by coronavirus
3 Federer named highest paid athlete of 2020 as Covid knocks Messi off top spot
4 GAA preparing for earlier return to activity but pitches to remain closed
5 Welcome look at one of hurling's finest
Real news has value SUBSCRIBE