Number of clubs in Championship and abroad expressed interest in midfielder 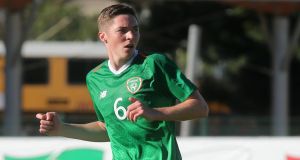 West Ham have underlined their determination not to lose their best young players after agreeing a deal with Republic of Ireland under-21 international Conor Coventry, who was out of contract out in the summer and a target for a number of clubs this month.

The 19-year-old is expected to sign a 3½-year deal that contains an option of a one-year extension.

The teenager, who has been at West Ham since he was 10, displayed his potential when he was named man of the match in Ireland’s European Championship qualifier 0-0 draw against Italy last October.

Talks with Coventry have been going on since the start of the season and West Ham had grown concerned they would lose the midfielder, with clubs in the Championship and abroad expressing an interest.

Frustration had mounted on both sides of the negotiating table and the standoff had raised the prospect of West Ham being forced to cash in on one of their most promising youngsters or risk him signing a pre-contract with a foreign side before departing in the summer.

Coventry, who has made two substitute appearances for West Ham in the League Cup and been included on the bench for a handful of Premier League games, is now likely to be loaned out to gain experience for the rest of the season. A move to a League One is side seen as his best chance of playing regularly.

West Ham are unlikely to recall Grady Diangana from his loan spell at West Brom this month. The winger has excelled for West Brom, who are chasing automatic promotion to the Premier League, and there is a feeling on all sides that the 21-year-old is benefiting from playing regularly.

It is thought that David Moyes, who replaced Manuel Pellegrini as West Ham’s manager last weekend, will bring Diangana back only if he loses players to injury or suffers a run of defeats before the window shuts.

West Ham have been drawing up a list of transfer targets since replacing Pellegrini with Moyes last week and are keen to strengthen their central midfield. They have held early talks with Benfica over an 18-month loan deal with an option to buy for their 20-year-old midfielder, Gedson Fernandes, who has also been linked with Manchester United.

West Ham also hold an interest in Genk’s Sander Berge, one of the most promising young midfielders in Europe, and Moyes is a long-time admirer of Stoke’s Joe Allen.

Moyes has confirmed that West Ham want to sign a new number two goalkeeper this month. However, they are struggling to convince Middlesbrough to lower their asking price for Republic of Ireland goalkeeper Darren Randolph and could switch their attention to a loan move for Bournemouth’s Asmir Begovic.

West Ham are also monitoring developments involving the Inter forward Gabriel Barbosa, who has been on loan at Flamengo. However Moyes’s budget is not huge and he aims to sort out his midfield before looking at other areas of the pitch.