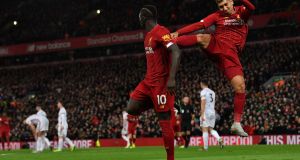 Records and landmarks keep being surpassed as Liverpool’s relentless red machine grinds on. This victory was more of a grind in the end; even though Liverpool initially threatened a goalfest the game went quite flat for long periods, but a two-goal margin of victory did not flatter the home side and the overall significance lies in the fact that Jürgen Klopp’s players have now gone unbeaten in the Premier League for a whole year.

No one else has managed that, and no other Premier League side have made it through the festive period without dropping points either.

Liverpool faced lively opponents in Leicester, Wolves and Sheffield United, all teams in excellent form, yet each obstacle was cleared, with this third win of the series restoring a 13-point lead at the top of the table with a game in hand.

Just about the only cause for optimism for those fearing the title race might be over already is that there has been a detectable fall-off in performance over those three matches. Leicester were stylishly routed, Wolves was a much more close-run thing and, while the outcome of this game was never in much doubt from the moment Liverpool took an early lead, after a bright beginning there were too many slack passes and wasted opportunities for the home crowd’s liking.

If Liverpool are tiring it proves only that they are human after all, though they might just have been managing a difficult situation. There was no need to expend unnecessary energy once in front and Sadio Mané’s second-half goal allowed everyone at Anfield to relax just a little.

Liverpool got off to the best possible start with a goal in under four minutes. It was a classic quick strike with a minimum of touches, Virgil van Dijk picking up Andy Robertson’s run down the left and Mohamed Salah ready and waiting for the low cross to supply a crisp first-time finish.

And, though the margins were quite fine on this occasion, there was no need for VAR interference. Robertson had timed his touchline run to perfection to stay onside, though his job was made easier when the chasing George Baldock slipped on the turf, and Salah was smart enough to delay his move towards the ball until the moment was right.

If that was not the opening Sheffield United had hoped for, it could have been worse still a few minutes later, when the lively Salah burst on to a pass from Jordan Henderson and brought a fingertip save from Dean Henderson with another first-time shot.

With the visitors largely penned in their own half, Liverpool moved the ball around confidently as if putting on an exhibition. At one point Robertson found Trent Alexander-Arnold with a lofted pass from one touchline to the other, only for the right back to send the ball immediately back in the direction it had come in an attempt to find Roberto Firmino in the penalty area.

When Georginio Wijnaldum shot narrowly over from Mané’s pass midway through the first half there was a sense that another breakthrough might be imminent, though Mané chose the wrong option when Henderson ran half of the length of the pitch to release him, a slight miscontrol allowing the United defenders to funnel back and cut out his eventual cross.

It was not quite all one way – Lys Mousset could have done better than shoot tamely at Alisson with an unmarked John Fleck calling for the ball at the far post – but United were indebted to Dean Henderson again when Mané nudged an Alexander-Arnold prompt into Salah’s path and the goalkeeper had to beat away a goalbound shot.

Liverpool were at their most fluent when attacking at speed on the counter rather than attempting to pass their way through a packed defence. United knew that, but were still obliged to come forward occasionally to try to get back on terms.

Liverpool were not quite as sharp as they have been in recent weeks, with a few passes going astray and Firmino’s touch in particular letting him down in promising situations, and despite a wealth of possession in and around the Blades area they were unable to add to their lead before half-time.

Firmino shot just wide at the start of the second half, before Salah almost claimed a freak goal with an effort that trickled through a crowd of defenders and came back off a surprised Henderson’s right-hand upright. The goalkeeper saw the ball only at the last moment but acted quickly enough to prevent it trickling over his line.

Mané’s goal, just past the hour, came from his own determined break down the right. He fed Salah in the middle and carried on running, so that the return pass found him in front of goal, where he was able to beat Henderson at the second attempt.

It was a goal considerably less scruffy than it looked. Robertson’s initial pass to Mané was excellent, Mané’s intelligent run even better, and the coolness of Salah’s final pass almost sublime. He might not have meant to do exactly that, but it worked, and for Liverpool at the moment everything works and little else matters. – Guardian