Brian Barry-Murphy: ‘When we played Man United, it was like Cork in the All-Ireland’ 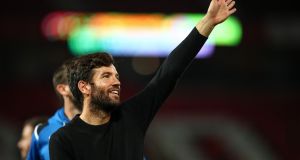 Brian Barry-Murphy: ‘I one million per cent believe that we have exceptional young players who will go on to higher things.’ Photograph: Getty Images

Spotland, Rochdale, St Stephen’s Day: a little whirlwind of a match has ended with five goals scored, all six subs used and the home team down to 10 men for the 13 minutes of time added due to their left back’s serious injury. Rochdale 2-3 Fleetwood Town was its own mini-epic.

Out into the darkness, grumble 3,000 home fans. It is wet and wintry and their team has lost again. The referee, as ever, is a focus of ire.

Out on the turf, the usual handshakes are exchanged, even with the ref.

Out there, Brian Barry-Murphy is circling, head down, hands in pockets, deep in thought. His young team have just lost for the seventh time in eight games to sit two places above the relegation zone in League One.

Barry-Murphy, as he explains in a corridor an hour later, was considering what to say. His goalscorer, Aaron Wilbraham, may be 40, but he has a 17-year-old defender and a 16-year-old substitute. Seven of the 10 who finish are 24 or under and the player carried off is 20. The Tannoy plays Oasis’ Live Forever as they trudge to the dressing room.

Barry-Murphy is young himself, managerially. At 41, he is only nine months into his first post. He has already received personal praise for his team’s style and there have been highs for Rochdale, such as a 1-1 draw at Manchester United in the League Cup in September.

But, as he paces the pitch in December, suddenly being manager of Rochdale looks a very difficult job indeed.

“I’m just trying to make sense of it for the players really,” Barry-Murphy says, explaining his thought process as he had circled.

“We’ve a very young squad – apart from one who’s 40. I just think it’s important that I try to provide clarity for the lads, remind them how well they’ve done, so that they don’t view the season as snapshot of the last four or five games, which have been difficult.

“They’ve achieved amazing things and because they’re so young and, you could say, vulnerable to stronger, more aggressive teams, there will be spells when they find it very difficult.

“But I one million per cent believe that we have exceptional young players who will go on to higher things. It’s important to go through this painful period. Once they come out of it, the next period of the season can be very exciting and I believe it will be.”

Unfortunately for Barry-Murphy, three days later Rochdale lost 1-0 at Gillingham and had a man sent off. Eight losses in nine. Barry-Murphy was honest, Gillingham could have scored more he said.

Rochdale had been suffering from a devastating run of injuries – ten first team players out at one point – even before the loss of another man against Fleetwood. And Christmas is unrelenting. Three days on from Gillingham and there was another game, this time a local derby at Accrington Stanley.

Thankfully ’Dale had one of their elders back. Ian Henderson is 34 and he scored the opener. When Stephen Dooley – once of Coleraine, Derry City and Cork City – added a second, Rochdale had their winner. Barry-Murphy looked and sounded relieved. Who wouldn’t be?

In Ireland Brian Barry-Murphy may be the son of the father Jimmy, Gaelic royalty, but in Lancashire he has no such status. At Spotland the framed jerseys on the wall are from the likes of Rickie Lambert and Grant Holt. This is where Scott Hogan started. Here Barry-Murphy is popular, but he is an unproven first-time manager with an idea who needs results.

This is Barry-Murphy’s new, frontline reality and it can be harsh as well as rewarding. After five years as player-coach, then coach, he was made Rochdale manager temporarily in March. The team had won one of its previous 12 games and sat second-bottom. Under Barry-Murphy they won six and drew two of the remaining 11. There were five clean sheets. ’Dale survived with some comfort and Barry-Murphy was appointed full-time.

This season began in the same spirit. After six matches Rochdale were tenth having just won 3-0 at Southend. There they scored a goal featuring 16 passes. It went viral and, as is the way, there was a rush of praise for the manager and his players. People then forgot about Rochdale, who lost their next game 6-0 at Peterborough.

Barry-Murphy didn’t forget. What concerned him was that such a defeat could destabilise players’ faith in his patient, pass-move-press football. But there was no self-doubt, that is apparent.

“I’d define pressure as tough runs of results,” he says, “and making sure you come through them, showing the way we play works for us.

“You could view me as pig-headed but I don’t believe for a second that we can rip up the way we do things because we’re having a tough run. If I was one of the players, I’d be saying: ‘Well you convinced me this works and now you’re saying it doesn’t’.

“It’s not a bluff. I believe this works for our players. I believe players always want to know what it takes to get results – if you can convince them of processes that work and show them . . . I think it’s the same as the top golfers, they want a swing that works under pressure, that stands the test of time.”

It is a convincing comparison. Barry-Murphy is adamant performance comes before results because ultimately performance will produce results – good and bad.

Such zeal places him in the “progressive” manager bracket along with someone such as Graham Potter or Brendan Rodgers – or future Republic of Ireland manager Stephen Kenny. The desire to control the ball in order to control the game can feel like a new orthodoxy at times, but its essential logic is obvious. And from Brian Barry-Murphy, there will be no detour into pragmatism.

“We’ve a young right back, 17. Every team we play, they put a 6ft 3in striker on him and hit him with loads of long balls. That’s just the way it is.

“We’re not able to go and buy a 6ft right back who can stop that, we’ve to find ways of dealing with it and getting results while we blood these young players. I just believe our club is different. If we want to go out and buy players with money we don’t have, then we’ll just be like every other club in the UK, we won’t stand for anything.”

With perhaps too much self-deprecation, he refers to his playing career – Cork, Preston, Sheffield Wednesday, Bury and Rochdale – as that of a journeyman; he has zero interest in the description applying to his coaching career.

“I remember speaking to Liam Mackey of the Irish Examiner about eight or nine years ago and he looked at my playing career and said it was a career of ‘almosts’.

“And it made sense to me. So in my coaching career, I’m just going to enjoy it. Where it takes me, it takes me.”

At Hillsborough in January 2003, Barry-Murphy joined a Wednesday side bound for relegation from the Championship, who then finished 16th in what is now League One.

He was 24 when he arrived and stayed 18 months – “it was a defining moment in my career. There was so much expectation, so much pressure, I actually went into games thinking it wasn’t enjoyable. It’s a huge club with huge support and I just remember what it was like to view games with a must-win mentality – without knowing what it was that would win games.

“It made a lot of sense to me after that and I always thought if I was in this position, to think of the psychology of what happens when players are actually on the pitch and dealing with the worry . . .”

Must-win anxiety, on the pitch, in the dugout, is a constant in football. Match results matter to Barry-Murphy – and to the Spotland boardroom – but so too does the club and its place in a town with significant Asian and African immigration. He has been out to those communities to try to increase Rochdale’s fanbase.

Days like today should help. The FA Cup, live television and Premier League opposition, Newcastle United, are in town. There will be an influx of cash and interest which should help secure the future.

Two seasons ago, ’Dale held Tottenham 2-2 and Ian Henderson scored. There’s the 1-1 at Old Trafford four months ago. Barry-Murphy’s gentle confidence should see them well-prepared, even with injuries. He is aware of the impact on profile of the match.

“For Newcastle you’ll see our town transformed. I always say to friends in Ireland, it’s like All-Ireland final week, everyone comes out. When we played Man United, it was like Cork in the All-Ireland. Brilliant to see, flags out. It’s what it’s all about.

“On the way to Old Trafford I said to the lads – we’ve loads of Irish lads – ‘Jesus, this is like going to Croke Park.’”