VAR raises its head again as Liverpool squeeze by Wolves 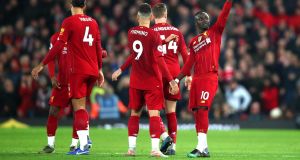 The title is surely now Liverpool’s to lose, whatever their manager has to say on the subject. This narrow victory extended the home side’s lead at the top of the table to 13 points with a game in hand. Liverpool have reached their half way stage of the season with 18 wins and a draw from 19 games played. That is 55 points from a possible 57, and if anything is to go awry in the second half of the season, bearing in mind that Leicester City and Manchester City are not exactly breathing down the leaders’ necks, the collapse is going to have to be something quite spectacular.

Now the bad news. This was another significant game disfigured by VAR. Liverpool had a goal approved when it could have been disallowed, Wolves saw an equaliser chalked off for an offside undetectable to the naked eye.

Considering the form Liverpool are in it reflects great credit on Wolves that there was barely a cigarette paper between the two sides, except that is now an outdated expression. Nowadays, sadly, it has to be an armpit, an eyebrow or a shoelace. There was almost literally nothing to choose between these two excellent teams except the opinions of Mike Riley’s scrutineers, and from a Wolves point of view at least, that was unsatisfactory. Even as Anfield chanted “Liverpool, Liverpool,” in the closing stages, the Wolves supporters struck up a chorus of “VAR, VAR,” in ironic response.

Until VAR intervened the first half was an enjoyably evenly contested affair between two sides who both pass the ball around well. There was not a great deal of goalmouth action but Dioga Jota soon let Virgil van Dijk and Joe Gomez know that he was willing and able to run at them with some success, while at the other end Liverpool quickly found a defence too compact and organised to fall victim to the raking cross field passes Trent Alexander-Arnold and Van Dijk kept trying.

Rui Patrício had been the busier of the two goalkeepers before Liverpool opened the scoring just before half time, though apart from one scrambling save to deny Sadio Mané his stops from Robero Firmino and Mo Salah were routine.

Just when Wolves must have thought they had made it to the break without conceding a more direct long ball from Van Dijk picked out Adam Lallana’s run into the area, and though Mane stuck the ball into the net neatly enough from a rebound from the midfielder’s shoulder Liverpool celebrations were cut short when the referee, Anthony Taylor, adjudged Lallana to have handled. Reasonably enough the decision was referred to Stockley Park for checking, and when word came back after a couple of minutes that Lallana had not used his arm – even though it was outstretched – the goal was allowed.

The protests from the travelling fans in the Anfield Road had barely died down when Wolves themselves became embroiled in a VAR debate at the other end. When Pedro Neto put the ball firmly past Alisson after Firmino’s attempt to clear a Jonny cross landed at his feet there was no question of offside in the act of scoring, yet VAR took the view that the goal would have to be chalked off because about a quarter of Joao Moutinho’s boot might have been offside in the build up.

Anfield naturally cheered the verdict, delivered deep into stoppage time, though Wolves once again appeared hard done by particularly as they thought they had just silenced the Kop on the stroke of half time. The ball was back on the centre spot waiting for the restart as the examiners studied the replays, the natural order of things so disrupted that the normally placid Nuno Espírito Santo was booked in his touchline seat. You have to wonder where the game is going to end up if this sort of thing is accepted as standard practice. As Jürgen Klopp himself said a couple of weeks ago, there is simply no point in celebrating goals any more. Or as the Wolves fans had it at the end: “One-nil to the VAR.”

At least Wolves have shown in the past they are capable of recovering from setbacks, though this time they were not playing against 10 men, had all three of their goalscorers from the victory over Manchester City on the bench and were bound to be feeling the effects of a game just two days previously. Naturally Adama Traoré added a little energy and enthusiasm when he came on but he did not actually make any headway, even if Liverpool were indebted to their goalkeeper for a save when the lively Jota cut in from the right. Wolves had a couple of late chances to snatch a draw, from almost identical positions on the edge of the Liverpool area, but shots from Moutinho and Romain Saiss both ended up in the upper tier of the Anfield Road stand, before a last effort from Traoré was deflected behind for a corner. When it’s not your day, it’s really not. – Guardian