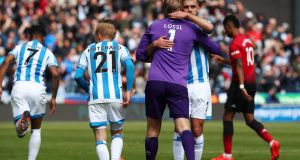 Manchester United’s slender hopes of a top four finish were ended in shambolic fashion when they surrendered an early lead to relegated Huddersfield, allowing the club marooned at the bottom of the table with 14 points to claim a wholly unexpected 15th.

Not that much has gone for the Terriers in their two-season stay in the Premier League, but at least the side that shares the early relegation with Derby County can take pride in taking four points from Manchester United in two league meeting at the John Smith’s stadium. Huddersfield won this fixture last season, and despited a shocking start to the game they had their chances in the second half to cause a similar shock. In the circumstances they were more than happy with a draw, however, which is more than can be said for United. Ole Gunnar Solskjaer’s side were hoping to stay in contention until the final day of the season at least, but this result coupled with Chelsea’s win against Watford means a Champions League placing is now out of reach.

United had no one to blame but themselves. They played some good stuff in the first half, mainly because they were allowed to, with Juan Mata, Paul Pogba and even Alexis Sanchez finding it easy to slice through the home defence. Yet in terms of end product the visitors were almost as ineffective as Huddersfield themselves, and only turned round in front because Jonas Lossl failed to make a routine save from Scott McTominay’s speculative shot.

It was the sort of mistake David de Gea has been making of late. Lossly was probably unsighted as McTominay sent a shot goalwards from the edge of a crowded area, but even so an effort of no great pace went straight through the goalkeeper to give United an early lead. De Gea himself retained his place in the United goal, as Solskjaer had promised, though if the idea was to help rebuild his confidence he had to wait until the 40th minute, when a Phil Jones mistake led to a shooting chance for Karlan Grant, for an attempt on target to deal with. De Gea duly saved with his legs, probably leaving the striker feeling he could have done better with the sort of opportunity Huddersfield have been failing to put away all season.

Pogba headed against the bar just before the interval, and Marcus Rashford might have been sharper to react at the near post when Sanchez beat Erik Durm to a ball the defender thought was rolling dead, though United were unable to translate their clear superiority into goals and on occasions Pogbas and Sanchez were downright wasteful in possession. A better team than Huddersfield might have made them pay early in the second half when Sanchez gave the ball away on half way and Juninho Bacuna drove purposefully towards goal, but instead of returning his pass Grant blazed high over the bar.

United still felt safe enough to send on Ander Herrera for Nemanja Matic and Tahith Chong when Sanchez went down injured, but just past the hour Huddersfield hit them with a route one sucker punch. With everyone but Luke Shaw up for a corner, Lossl caught Mata’s cross and punted the ball downfield, where the bounce eluded the defender’s attempt to cut out the danger and allowed Isaac Mbenza to run on and place a shot under de Gea for his first Huddersfield goal. The stadium erupted, Huddersfield fans having had little to cheer in recent weeks, and when a chant went round the ground reminding the visitors that they were playing a relegated side some of the United supporters joined in. If that was comedy the five minute wait for a new corner flag after Mbenza snapped one with his goal celebration was pure farce, a reminder if one were needed that United were up against opponents of Championship standard.

Pogba hit the bar again as United chased a late winner, Chong saw a shot saved and Rashford missed the target with a decent chance, though Grant brought a save from De Gea at the other end as the visitors left themselves stretched. A draw was a fair enough result on the balance of play, even after eight minutes of stoppage time, and there was no doubt who enjoyed it most. “Champions League, you’re having a laugh‚“ was the taunt as the United fans made their way home.