Tempers flare as Dundalk slip to another defeat 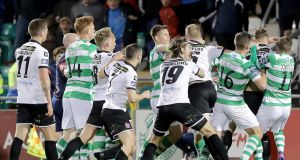 Shamrock Rovers and Dundalk players get involved in an altercation late in the game. Photo: Morgan Treacy/Inpho

A few of their former players ganged up on Dundalk to make it another disappointing night but it is the current crew that Stephen Kenny will be concerned about. In every area of the pitch a little of last season’s magic is missing and they were well beaten here by a team that had not been setting the world alight of late.

Ronan Finn got the first for the Dubliners here while down in Cork Sean Maguire made Cork’s 12th straight win secure by grabbing their second of five. Perhaps it is the ongoing absence of Andy Boyle that hurt them most, though, because the defending for both of the goals conceded was remarkably poor and it is hard to see them having any hope of closing the already huge gap Cork have opened up on them if they cannot sort things out in that department.

It is hard to see it anyway, of course. This defeat leaves them 15 points adrift of their rivals with just a dozen games played and after Galway and Bray had both beaten them in recent weeks, it was clear from the outset that Shamrock Rovers, without a win over the champions in nine attempts before this, reckoned they could too.

They made most of the early running and might have taken the lead when David McAllister ended a good passing move with a shot that flew narrowly wide of the target. It didn’t take long, though, and when the visitors went to sleep a few minutes later Graham Burke capitalised by picking up possession and darting into the box from wide on the right. The bigger problem it turned out, though, was in the centre where Finn was allowed time and space to tee up a poked shot that left Gary Rogers with no chance really.

The goalkeeper was equally helpless for the second which McAllister headed home from six yards out after having been left entirely unmarked from a corner. It was remarkable stuff from a side whose defensive capabilities was a key element in their European success last season.

There was only one of that regular back four on the field here, though, and Sean Hoare, of whom most is probably expected over the long term, remains some way of the sort of form he showed at St Patrick’s when he was attracting interest from England.

In central midfield, Robbie Benson’s absence through injury is clearly being felt too and the problems were compounded after half an hour when Stephen O’Donnell took a blow to the head and was forced off. By that stage Rovers were already one up and without him to anchor things, the game continued to slip away from them with McAllister getting his goal eight minutes before the break.

The hosts, as it happens, were vastly superior to last week when they squandered a single goal advantage against Limerick by sitting back although they were still lucky be the end to have led here by two.

When they needed to dig in here they did and it got fairly feisty at times although Dundalk gave as good as they got and things threatened to spill over at one stage when Darren Meenan reacted badly to Finn being fouled.

With 13 minutes remaining, David McMillan reckoned he might have had a penalty when Simon Madden appeared to pile into his back but still the locals continued to look reasonably comfortable until the dying seconds when Meenan, having looked to step rather neatly inside Hoare as he turned, opted to go down in search of a free rather than run into the considerable space. For his trouble he got his second yellow of the night and from Pat McEleney’s long, angled free Niclas Vemmelund headed home.

Last year, the goal would surely have paved the way to a late revival. This year, time swiftly ran out. It is too early yet to say the same about their season but it won’t be long if they do not improve fairly dramatically on this.