Guardiola to reward Sterling displays with offer of extended contract 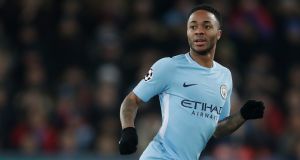 Raheem Sterling: man of the match for England against Italy in midweek and prominent in his club’s drive towards the Premier League title. Photograph: Laurens Lindhout/Soccrates/Getty Images

Pep Guardiola has stressed the importance of Manchester City keeping hold of Raheem Sterling after the 23-year-old impressed again for England in midweek.

It is barely a year since the winger’s future at the Etihad appeared to be in doubt, but Guardiola is aware Sterling’s transformation this season into both a goalscorer and effective attacking threat will not have gone unnoticed. The former Liverpool player is already under contract until 2020, but it is understood City will open negotiations on an improved extension at the end of the season.

“Txiki [Begiristain, the club’s director of football] is talking about that,” Guardiola said before City’s visit to Everton on Saturday evening. “There is no doubt we have to keep him. Maybe other clubs are now interested in him because he is playing so well but he knows how important he is to us.”

Sterling was man of the match in England’s 1-1 draw against Italy, and from being a fringe player a year ago is now considered a certain starter when England take to the field in Russia in June.

Guardiola revealed that John Stones suffered concussion in the game at Wembley before coming off the pitch late in the second half, and will have to sit out this weekend’s match at his former club due to medical protocol.

“John feels fine now, but he will be unavailable for Everton because he must wait seven days,” the City manager said.

Stones should be able to return for the Champions League quarter-final at Liverpool on Wednesday, and Guardiola is aware of the danger of the significance of the second trip to Merseyside overshadowing the first.

“We have had a three-week break, and plenty of time to review our games this season against Liverpool,” he said. “But I have still tried to prepare for Everton as if it is the most important game of the season.

“Goodison is always a tough place to go and I think it would be a mistake to do otherwise. We are very close to the title, two more wins would suffice, but I keep telling my players that though we are in a very good position, it is not done yet.”

Sam Allardyce believes Jordan Pickford has strengthened his claims to be England’s World Cup goalkeeper not only with an impressive display against the Netherlands but also with his performances throughout Everton’s difficult season.

Pickford has been one of Everton’s few transfer successes of last summer and during England’s recent 1-0 win in Amsterdam enhanced his prospects of starting in Russia next summer. The 24-year-old has conceded 50 Premier League goals in his debut season at Goodison Park but that statistic, Allardyce argues, reflects the team’s struggles in general and not the goalkeeper’s form.

“He’s given Gareth a lot to think about with his performance the other night and his performances for us. People go on about him conceding a lot of goals for Everton but that is not the statistic you look at. You look at the saves he makes. He’s been far too busy on too many occasions,” said Allardyce.

Allardyce said he has never felt insecure in his position at Everton, despite criticism from supporters and other managers being linked with the job, including Shakhtar Donetsk’s Paulo Fonseca.

“It is not an insecure position and never has been,” he said. “You can create as much insecurity as you like with speculation but the reality is I have never felt insecure.”

1 ‘A radical departure’: Who are CVC and what are their plans for rugby?
2 Connell losing touch with club championship is real tragedy of Normal People
3 Ken Early: Why international football is fading into obscurity
4 Michael Jordan speaks out against George Floyd killing in rare statement
5 Colin Kaepernick’s exile is too fresh for NFL to speak out on US protests
Real news has value SUBSCRIBE