Joe Gomez to miss ‘next couple’ of Liverpool games 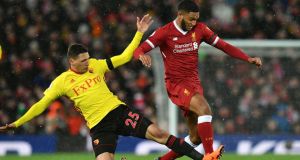 Liverpool’s Joe Gomez will return from injury before the end of the season. Photograph: PA

Defender Joe Gomez will miss the next couple of Liverpool games but is expected to play again this season.

The 20-year-old was forced off after only 10 minutes of England’s friendly against Holland last Friday with an ankle injury and has been assessed at Melwood this week.

Manager Jurgen Klopp said on liverpoolfc.com: “After the initial shock, we got the best news we could get.

“At the moment, it’s serious — and serious enough to rule him out for the next couple of games. But I think we will see Joe back on the pitch this season, it’s pretty sure, how it looks at the moment.

“He feels much better already but of course we need to be careful. I don’t know exactly how long but we hopefully have a lot of games to come and he will be part of a few.”

Gomez will definitely miss Saturday’s Premier League trip to Crystal Palace and the first leg of Liverpool’s Champions League quarter-final against Manchester City on Tuesday. The Merseyside derby is a week on Saturday, with the second leg against City on April 10th.

Trent Alexander-Arnold is in line to replace Gomez but Nathaniel Clyne is also in contention as he returns to the first-team squad for the first time since pre-season after overcoming a back problem.

“I said yesterday to the boys that we lost Joe but finally we got Clyney back,” said Klopp. “He has been back for a few weeks already but he has come closer and closer. He is a very good option.”

Liverpool will also be without midfielder Emre Can against Palace but he could be available for the Champions League game, while Andy Robertson has recovered from the dead leg he sustained playing for Scotland.