With Real facing Juventus and City taking on Liverpool, there is hardly a weak link in last eight 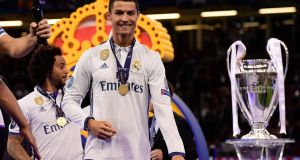 Few are likely to complain about Uefa abandoning the principle of players moving between Champions League clubs in January being cup-tied for the rest of the season – the transfer window itself already does quite a good job of keeping the leading contenders honest – though it was interesting to read in the small print the justification for the change.

In reality, it probably had something to do with Philippe Coutinho having to sit out the rest of Barcelona’s Champions League programme because some months ago he had appeared in earlier rounds for Liverpool, though this is what Uefa actually said: “A club may register up to three new eligible players without restrictions. This is in line with the existing regulatory situation in the different domestic leagues, which does not impose restrictions on eligibility for players registered for a new club during the winter transfer window.”

That seems fair enough – Alexis Sánchez is appearing for Manchester United after moving from Arsenal, after all – though it is only part of the truth. While the whole point of the January window is to allow teams to strengthen for the second half of the league season, the old cup-tie rule still applies in the FA Cup. In practice most Premier League teams can get round it, since their FA Cup involvement commences in January and if a transfer is in the offing the player in question need only miss a match, though lower down the league where Cup rounds take place before Christmas it is not at all uncommon for players who move to find themselves cup-tied at their new clubs.

So Uefa has picked out the league practice and ignored the cup tradition, which suggests once again that it is trying to push its main event as a league instead of a cup. It could be argued that the Champions League is a league and that the clue is in the title, though it is not quite as simple as that.

The Champions League is only a league, and even then only a quasi-league, before Christmas. When it resumes in the new year – ie when any player transfers between club have been made – it is knockout pure and simple. From that point on it resembles a cup, and for anyone who can remember the old European Cup it will always be a cup anyway. The group stages – unbelievably there used to be two of them – were bolted on to what used to be a straightforward contest between champions to pad out the proceedings, milk the television money and appease big clubs who were threatening a breakaway.

For all those reasons it is easy to dislike the Champions League, particularly as its undeniable ability to generate wealth for its regular contestants has resulted in a divisive imbalance of aspiration and achievement in domestic competitions, yet it must also be admitted that once all the fluff is out of the way, the present structure can deliver in a way the old European Cup rarely managed. Next week’s last eight fixtures are a case in point.

With the possible exception of Sevilla, who will not be expecting Bayern Munich to approach their games as timidly as Manchester United did, there is not a weak link in sight. Juventus v Real Madrid is a repeat of last season’s final, Barcelona v Roma pits La Liga’s leaders against third in Serie A, while Liverpool v Manchester City brings together two managers who have reached the final and the two Premier League sides who have arguably (sorry Spurs) provided most excitement this season. The old European Cup, though much-loved, did not do that. With only one team per country and an unseeded draw too much was left to chance, and the best ties would often come in early rounds rather than in the later stages.

The first meeting of Premier League clubs in the knockout phase since Manchester United defeated Chelsea in the quarter-final in 2011 will inevitably overshadow this weekend’s domestic fixtures. Jürgen Klopp has complained about having to meet Everton in the early kick-off the following weekend, a lunch-time Merseyside derby not being considered ideal for rest and recuperation between the two legs against City, though given Liverpool’s record against Crystal Palace they probably need to fully concentrate on this Saturday’s early kick-off first.

The Liverpool manager’s point was slightly undermined by the consideration that City also have a derby between the two legs of the quarter-final, and by the time they face Manchester United they could be in a position to clinch the league title. That rather depends on their next result; City have the late kick-off on Saturday and it takes them to Everton, the only side, albeit under a different manager, to have taken any Premier League points from the Etihad this season.

So, either side of pitting their wits against each other in a Champions League quarter-final with its promise of planting a Premier League flag in Europe’s last four, both Klopp and Pep Guardiola have to deal with Sam Allardyce. Even when its head is in the clouds English football always seems to find a way of keeping its feet on the floor.

Rory McIlroy admits Portrush nightmare was catalyst for his return to the top 21:00
FAI moves to defer portion of salaries as Fifa ponders cash support 20:30
NFL votes to expand postseason following cancelled annual meeting 20:21
‘For 25 minutes I ran out of oxygen’: Pepe Reina on his coronavirus battle 20:06
World Rugby aiming to outline range of options by end of April 19:03