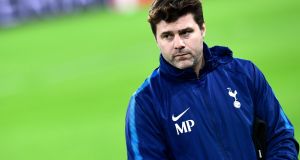 Mauricio Pochettino: “My focus is to win games with Tottenham. I cannot be kind with every single manager.” Photograph: Miguel Medina/AFP/Getty

Mauricio Pochettino will not change his defensive system to accommodate the fit-again Toby Alderweireld and has made it plain the centre-half is behind Jan Vertonghen and Davinson Sánchez in the Tottenham pecking order.

Alderweireld has endured a torrid five months, during which he has had hamstring problems and made only two appearances for the club. When he has felt fit, there have been times when Pochettino has disagreed and left him out – namely for the Arsenal and Juventus games in mid-February.

The situation has come against the backdrop of a breakdown in negotiations over a new contract and it has not been difficult to pick up on the mood at the club – he has become a disposable asset. Because of a clause in his deal, he can be bought for €28.5m in the summer of 2019. If Tottenham can get more for him this year, they may take it.

The 29-year-old re-injured his hamstring in training on February 22nd and returned to the squad for the FA Cup tie at Swansea on March 17th, when he was an unused substitute.

Alderweireld played 90 minutes for Belgium on Tuesday in the 4-0 friendly win over Saudi Arabia but the national coach, Roberto Martínez, has warned his place in the World Cup team will be under threat if he remains on the fringes at Tottenham.

Pochettino is unmoved by potential World Cup heartbreak. He stressed he would continue to pick a starting XI purely in Tottenham’s interests and at the moment that means sticking with Vertonghen and Sánchez, which he will do against Chelsea at Stamford Bridge tomorrow. Sánchez arrived in a club record €47.8m deal from Ajax last summer and it is difficult to overstate how highly the manager rates the 21-year-old.

“Every single player needs to show in training that they are better than their team-mate and then I pick,” Pochettino said. “In the last four or five months Toby has struggled with his injury. Now, he is playing and we use a back four, with two centre-backs, and we play Jan and Davinson. I am not going to change the system [to three centre-backs] because Toby needs to play in the World Cup and he needs to play [at Tottenham].

“I need to pick two centre-backs and, if you are happy, you keep the couple of players and he needs to wait. Like everyone. It’s the same situation with different players, like Moussa Sissoko. He maybe needs to play more because he was out of the France squad.

“I have an amazing relationship with Roberto. He texted me about his comments and I replied. I fully understand them. What do the national team managers want? They want their players to play. But my focus is to win games with Tottenham. I cannot be kind with every single manager.

“What can I do? I cannot play with 13 or 14 players. If Toby keeps working hard, he is going to have the possibility to play and compete. He is an experienced player. He needs to be fit and to be fit, he needs to train every day and give his best. That is enough, no?”

Meanwhile Antonio Conte believes Tottenham are ahead of Chelsea in their development even though the Stamford Bridge club denied their London rivals in the race for last season’s title.

The champions go into tomorrow’s derby five points behind Tottenham with both clubs targeting a top-four finish and the FA Cup from the run-in to a draining campaign. Conte has suggested in the past that Spurs have benefited in recent years without the same levels of expectation heaped upon managers at Stamford Bridge, though he acknowledged they have made considerable progress under Mauricio Pochettino.

“I think they have started before us,” he said of Spurs’ development. “I am talking about my period, my era, at Chelsea. We are talking about a team who, in the last few years, have been competing to win the title. Don’t forget that, two years ago, they were very close to winning the title when Leicester won it. Last season they tried to compete with us. Don’t forget that our run-in to the season was incredible. We won eight of our last 10 games.So for sure, now, they are ahead of us in terms of that development.”

However, for all Spurs’ excellence under Pochettino, they are still to win a trophy under the Argentinian.

“Every manager wants to win a trophy,” added Conte, who has welcomed Andreas Christensen back to training after a groin complaint and will assess Thibaut Courtois’s hamstring problem tomorrow. “But, if you just want to win trophies, maybe for important managers it’s easier to go to another country.

“In England, if you stay here, never, never will it be easy to win trophies. To be a [winning] coach in this league is a great achievement for a manager, because the tournament is so difficult.”