Injuries and crashes play part in unravelling of Darron Gibson 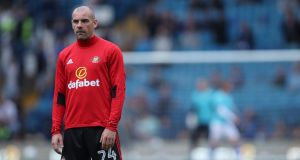 Sunderland’s Darron Gibson: in 2015 he was a mainstream Ireland international and Premier League footballer with Everton. Photograph: Getty Images

There is a question: “Where is Darron Gibson?” It is one that goes beyond geography.

It is a question that takes in Gibson’s life and career, his state of mind, his past and his future. It is an uncomfortable question, and one wonders how the 30-year-old from Derry would begin his answer.

A fortnight ago, on St Patrick’s Day, Gibson drove along Dovedale Road in Sunderland, close to the club’s training ground, and hit other cars. They were parked.

Sunderland lost 2-0. Gibson would not have played as he was injured. Had he not been injured, though, he would have played, and that, presumably, would have meant no trip in the car. We can join dots.

If searching for a starting point in the unravelling of Gibson, who just over three years ago was part of an Everton team in the last 16 of the Europa League and an Irish team that had drawn 1-1 in Germany in Euro 2016 qualifying, it could be those injuries which have continually interrupted his career. Some might consider that a generous assessment.

But in 2015 Gibson was a mainstream Irish international and Premier League footballer with Everton. Or at least that is how he appeared from bare statistics such as the above.

Our perception was not based solely on that. Gibson had begun the 2015-16 season with a different crash. After a domestic row, he said he jumped in his car at home in Cheshire and just drove. Unfortunately he drove into three cyclists at the side of the road; fortunately he did not kill any of them.

Where was Gibson then? He was off. Rather than stopping to check on the cyclists, Gibson drove to a local petrol station where his car hit a pump. He got out and filled up – wearing no shoes.

Unsurprisingly the police arrived, and Gibson ended up in court. He was fined and banned from driving for 20 months.

The ban from September 2015 took him to May 2017, by which time Gibson had left Everton for Sunderland.

Manchester United-Everton-Sunderland: in his head Gibson must have considered that trajectory. He had won the League at United, finished seventh then sixth in his first two seasons at Goodison Park, then sunk with Sunderland into relegation to the Championship. And from there?

His has been an unusual career. He has been central yet peripheral. He was at a European Championships in Poland but didn’t play. He scored in two consecutive Champions League semi-finals for United – against Bayern Munich in 2010 and Schalke in 2011 – but was not essential.

Against Bayern, Gibson was 22. He started, Paul Scholes was a sub.

Yet within nine months of that Schalke match, which led United to the Champions League final against Barcelona, he was at Everton.

Alex Ferguson had not included him even on the bench against Barcelona, and said in his 2013 autobiography: “Darron Gibson was an example of one who brings you to that crossroads.” When he got there Ferguson looked in a different direction, towards Tom Cleverley.

It was a moment for Gibson. “Some people would say I failed at United, and towards the end I wasn’t playing my best,” he said. “So I’ve come here [Everton] to start showing people how good a player I am. I wouldn’t say I failed, I’d say I never got the chance I wanted.”

Then came the injuries – knee, thigh, hip to begin with. Next the big one playing for Ireland against Kazakhstan – cruciate ligament damage. That was October 2013, his next game was September 2014. He was 26, and had started only 66 Premier League games.

But he came back and, to an extent, re-established himself. Pre-Euro 2016, Gibson started a Belarus friendly in Cork. But he did not make Martin O’Neill’s squad. Others did, of course. What was Gibson thinking then?

In January of last year came the move to Sunderland. David Moyes had signed him for Everton, and Moyes was on Wearside. Sunderland were bottom of the Premier League. Gibson made his debut as a substitute at Crystal Palace. Sunderland, remarkably, were 4-0 up.

So there was hope. One of Ferguson’s managerial mantras was “regeneration is an everyday duty”, and maybe Moyes and Gibson remembered that. The following week Sunderland lost 4-0 at home to Southampton.

After that there were 10 more Gibson appearances of varying lengths, none of which brought a win bonus. He was now part of Sunderland’s sagging cycle.

“There are too many people at the club who don’t give a f-ck,” he said, while admitting: “I’m off my face in here.”

But he was in the team, and when Sunderland had a run of three wins and two draws in seven games before the New Year, a local fanzine referred to Gibson as “arguably Chris Coleman’s most important midfielder”. Gibson had altered perceptions again.

And now once more. He is in court next month.

On Thursday morning Dovedale Road was bathed in sunshine, Sunderland’s training ground was a picture, and Coleman moved on quickly when asked about Gibson. It was to a monologue about regret.

“I say to the players ‘don’t miss the 90 minutes, you can never get it back. Playing’s the best days of your life’.”

Gibson, out of contract soon, is unlikely to play for Sunderland again. Saturdays, 3pm, where will he be?

“In time that will all come out, and that will be dealt with – that’s where Darron Gibson is,” Coleman said.

Coleman spoke from experience, having been forced to retire following a car crash. He was 30. It is considered old for the game. It is young for regret.