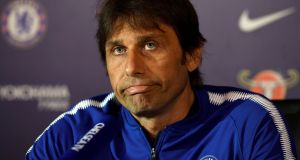 Chelsea manager Antonio Conte: “This is an important game for us.” Photograph: Tony O’Brien/Reuters

Antonio Conte has conceded Chelsea’s chances of qualifying for the Champions League may hinge on beating Tottenham on Sunday.

Chelsea, who are fifth, five points adrift of Spurs with eight games to play, hope to extend the visitors’ wretched record at Stamford Bridge. Tottenham have not won there for 28 years.

Conte is unsure whether Thibaut Courtois and Andreas Christensen, who withdrew from international duty with Belgium and Denmark respectively, will be available after suffering hamstring and groin problems.

“We are talking about a great team, a really good manager and a team with many talented players. I have great respect for Tottenham. In the last few years they grew a lot. Now they’re one of the best teams in England. But nothing is impossible.”

Courtois and Christensen will be assessed, with Willy Caballero and Gary Cahill ready to play. David Luiz is ruled out with a knee problem and Ross Barkley, recovered from his latest hamstring problem, will play for the under-23s on Saturday.

“We have two big problems – Courtois and Christensen – and we have to check if they are in the right physical condition to have good games,” Conte added. “Otherwise I have to make a different decision. One solution would be Cahill in the middle. We are talking about a great player and someone I trust, and it wouldn’t be the first time Cahill would play in this role.

“With Barkley, we are talking about a player that is coming back from a bad injury, seven months without playing. We want to have patience with him and then to be sure before we bring him back to the first team.”

Harry Kane is a major doubt for Spurs after sustaining ankle ligament damage three weeks ago. The 24-year-old was expected to be sidelined until at least next month, but manager Mauricio Pochettino has refused to rule him out of Sunday’s clash.

While Conte is full of admiration for Kane, he feels Spurs are dangerous opponents with or without their top goalscorer.

“When you have a player, a striker, who scores 30 goals every season, for sure when he’s missing you can feel this. But, at the same time, Tottenham are an important team for the whole team.

“They have many important players, many talented players. They play good football with great intensity. Also, in the past, they showed that, despite Kane missing many games, nothing has changed.”

Kane, winner of the Premier League golden boot for the past two seasons, has been in prolific form once again this campaign.

He hit 35 goals for Spurs in all competitions before his injury in the recent win at Bournemouth. Chelsea’s strikers, in contrast, have struggled to find the net on a regular basis.

Alvaro Morata has not managed a Premier League goal since St Stephen’s Day, while January signing Olivier Giroud is still waiting for his first league strike since joining from Arsenal.

Morata’s poor form saw him left out of Spain’s squad during the international break, although Conte has backed the former Real Madrid player to enjoy a productive end to the season.

“I think that, in the last week and this week, he has worked very well,” the Italian coach said of Morata.

“I think that he needed to work hard because, don’t forget, Alvaro was out for one and a half months with his back problem.

“Now Alvaro is really fit, 100 per cent, and ready to have an important final of the season: for Chelsea and then, for him, to have the chance to go and play in the World Cup.”