Rashford’s early double enough for United to hold off Liverpool 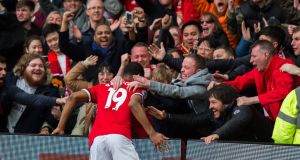 Marcus Rashford returned to the starting line-up in style as the Manchester United forward struck a match-winning brace to settle a pulsating 200th meeting with bitter rivals Liverpool.

The hotly-contested race for second spot in the Premier League only added intrigue to the Saturday lunchtime duel between these old foes at Old Trafford.

Jose Mourinho may not yet fully grasp the emotion of this fixture but Rashford certainly does, with the academy graduate inspiring his hometown team to a 2-1 win as Eric Bailly’s own goal brought a nervy ending against Liverpool.

The 20-year-old’s first-half double on his first league start since St Stephen’s Day sent his side five points ahead of Jurgen Klopp’s Reds and will have impressed England manager Gareth Southgate, who saw the forward turn superbly and break the deadlock in the 14th minute.

Under the long ball, Romelu Lukaku all too easily beat Dejan Lovren in the build-up to the opener and again shrugged off the Liverpool defender 10 minutes later, with Rashford firing home another after Juan Mata was blocked out.

The Spaniard would waste a glorious chance to put the game to bed as half-time approached and Liverpool rallied, with Bailly — making his first start since November — inadvertently turning a Sadio Mane cross past his own goalkeeper.

Mourinho’s men had to dig deep as they struggled to get the bus in position against Liverpool’s potent attack during the closing stages, but they dug deep for a big three points.

Paul Pogba’s injury on the eve of the game could have disrupted United, but Mourinho could have few complaints about his side’s first-half performance or the Old Trafford atmosphere.

A remarkable din welcomed the sides and that intensity translated onto the field during an edgy start.

It took 14 minutes for either side to a muster a shot — but it was well worth the wait from a United perspective.

Lukaku beat Lovren to flick on David De Gea’s long ball, sending Rashford scampering through. The forward looked to be heading nowhere, only to superbly turn away from Trent Alexander-Arnold and fire across Loris Karius to send the Old Trafford faithful wild.

It was a gut punch that stunned Liverpool.

While Roberto Firmino was proving a handful and Virgil van Dijk wasted a glorious chance, United’s early goal gave them a foundation to build on — and they made matters worse for Klopp’s men in the 24th minute.

Lukaku again outmuscled Lovren and played Mata through on goal. Van Dijk came across to deny the Spaniard but goalkeeper Karius had been pulled out of position and the Liverpool defender’s block fell kindly for Rashford to slot home.

Mata would have put the game to bed had the unmarked attacking midfielder aimed his acrobatic close-range effort on target, or realised he had time to control the cross and strike.

It gave Liverpool hope and they looked for a quick response after the break as Van Dijk headed onto the roof of the net and Mohamed Salah threatened to belatedly flicker into life.

However, most attempted crosses and shots were being blocked, with the visitors furious that one by Andrew Robertson did not lead to a penalty as it struck Antonio Valencia’s hand.

United found themselves pinned back much to Mourinho’s frustration.

Substitute Adam Lallana went down in the box under pressure from Chris Smalling and James Milner fired over, before Bailly gave the visitors the lifeline they required by somehow directing a Mane cross past De Gea.

The 66th-minute own goal ratcheted up the tension inside Old Trafford, where the decision to replace Rashford with Marouane Fellaini led some fans to jeer during a standing ovation. United coach Silvino Louro looked puzzled by the reaction.

Klopp risked being sent off as he raced down the touchline in anger after Lovren and Fellaini came together, but referee Craig Pawson let the Liverpool boss off with a warning.

Tempers frayed as the clock wound down and United bodies were flying everywhere to block late chances as the match ended in a home win.