FA Cup third round: How did the Irish fare? 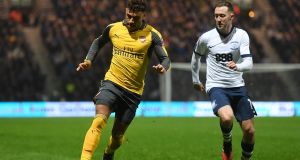 Daryl Horgan made his Preston North End debut on Saturday following his January move from League of Ireland champions Dundalk.

Horgan, wearing the number seven shirt, flickered sporadically during a 10-minute cameo at Deepdale as North End were beaten 2-1 by Arsenal in the FA Cup third round.

Horgan was one of a number of Irish players, senior and underage, in FA Cup action across the weekend.

And they enjoyed mixed fortunes - Ireland skipper Seamus Coleman saw his Everton side dumped out by Leicestter City, while Daryl Murphy scored his first goal for Newcastle United in a 1-1 draw with Birmingham City.

Another League of Ireland export and former Dundalk star, Richie Towell, got a rare start as Brighton and Hove Albion beat Milton Keynes Dons 2-0 at home.

Towell has had a frustrating time with injury since moving to England’s south coast but Seagulls manager Chris Hughton was pleased with the midfidler’s shift on Saturday, he said: “I thought he was very good.

“He’s a fit lad, hasn’t had the games he’d have liked, got a whack towards the end, but I thought he covered a really good distance today.”

Preston had gone 1-0 up against Arsenal in the day’s late kick off before the Gunners turned things round in the second half thanks to goals from Aaron Ramsey and Olivier Giroud- and Horgan wasn’t the only Irish winger to catch the eye with Aiden McGeady impressing on the left wing.

And the 30-year-old, who is currently on loan at Deepdale from Everton, was left to rue a missed opportunity to knock out one of the big boys, he said: “Maybe we invited the pressure which they put us under in the second-half and we didn’t attack in the way in which we did in the first-half.

“But Arsenal are a quality side and we can’t have any complaints. We were unlucky at the end with the goal but it was a pretty even game.”

The predicted clash of Martin O’Neill’s first-team titans didn’t come to fruition in East Anglia as Robbie Brady was left out of the Norwich City squad for the visit of Southampton - Shane Long started up front for the visitors in a 2-2 draw.

The magic of the cup was somewhat absent at the Stadium of Light as Sunderland and Burnley played out a 0-0 draw, with John O’Shea, Stephen Ward and Jeff Hendrick all featuring in a fixture which won’t live long in the memory.

Meanwhile the Wembley dreams of James McClean, Darren Randolph, Glenn Whelan and Shay Given are over after West Bromwich Albion, West Ham United and Stoke City were knocked out by Derby County, Manchester City and Wolverhampton Wanderers respectively.

Former Bohemians and Ireland Under-21 fullback Matt Doherty was on the scoresheet for Wolves as they helped increase the pressure on Stoke boss Mark Hughes.

There was also a goal for Anthony Pilkington, however his early effort couldn’t prevent Cardiff City losing 2-1 at home to Fulham.

And there was a red card for Ireland Under-21 and Luton Town defender Glen Rea as the Hatters were beaten by 2-1 Accrington Stanley - who are they?!