Leicester finally win away from home to knock out Everton 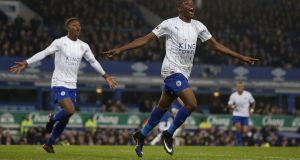 A quickfire brace from substitute Ahmed Musa saw Leicester come from behind to win 2-1 at Everton and book their place in the FA Cup fourth round.

What had been a lacklustre third-round tie very much came to life just after the hour mark, with Romelu Lukaku’s close-range finish in the 63rd minute cancelled out three minutes later by one from Musa.

Four minutes later, the Nigeria forward scored the winner with a cool strike as Everton — last season’s semi-finalists — were sent crashing out.

Certainly, this all-Premier League clash took time to warm up.

After Leonardo Ulloa glanced a header just wide of their goal in the fourth minute, Everton showed some early signs of threat as Lukaku and Enner Valencia each produced decent crosses that Ross Barkley and Seamus Coleman, respectively, were unable to finish.

But the hosts then found themselves stifled for much of the rest of the first half by Leicester, while Foxes debutant Wilfried Ndidi had a shot low blocked and Demarai Gray was thwarted by Toffees goalkeeper Joel Robles.

Musa was introduced to a contest that had been seriously low on entertainment in the 35th minute, replacing the injured Ulloa, before Everton started to look a bit more dynamic again towards the end of the first half.

What appeared to be the best chance of the opening 45 minutes went unconverted by Lukaku in the 42nd as he headed wide at the far post after being teed up by Valencia, and the Belgium striker then tried his luck again moments later, firing a shot over from outside the box.

Everton boss Ronald Koeman attempted to give his side added attacking impetus by bringing on Gerard Deulofeu for Mason Holgate as the second half got under way.

And after one shot from Valencia was blocked and another acrobatically fired wide by the Ecuadorian — either side of Wes Morgan having a header saved by Robles — it was Deulofeu who provided the cross from which Lukaku tapped in to make it 1-0.

But Leicester responded swiftly as Musa drew things level with a finish at the second attempt, bundling the ball in after it had initially hit the post following Gray’s delivery.

And Musa then struck again within moments to stun Goodison Park, combining with Danny Drinkwater and slotting well past Robles.

As the home side applied pressure in search of an equaliser, Kevin Mirallas — who had come on for Valencia — brought a good save out of Leicester goalkeeper Kasper Schmeichel.

But it was too little too late from Everton, as Claudio Ranieri’s men closed out the victory.