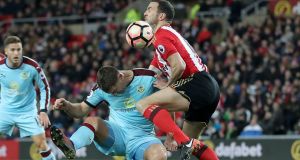 Burnley’s Sam Vokes and Sunderland’s John O’Shea battle for the ball during their FA Cup third round match at the Stadium of Light. Photo: Owen Humphreys/PA

Even Joey Barton could not inspire Burnley as they played out an FA Cup third round stalemate at Sunderland.

The controversial 34-year-old midfielder was handed a second debut for the Clarets almost four months after his last appearance for Rangers in the 5-1 Old Firm derby defeat at Celtic, which prompted a training ground bust-up and ultimately his exit from the club.

But the Premier League rivals were unable to find a goal between them as a crowd of just 17,632 at the Stadium of Light watched them slug out a 0-0 draw.

Black Cats boss David Moyes was at least able to reflect upon a better performance than the one he got in the league against the same opposition at Turf Moor seven days ago when his side was trounced 4-1.

Given his association with derby rivals Newcastle, Barton — who was booked late on for a cynical trip on Adnan Januzaj — was predictably booed at every touch as he tried to work off his ring-rust during a distinctly forgettable first half.

Moyes had fielded as strong a side as possible with injuries and African Nations Cup call-ups limiting his options, and that meant a return for Jason Denayer in central defence rather than the midfield role in which he has been playing.

Jack Rodwell, whose time at the Stadium of Light has been testing to say the least, built on his encouraging display against Liverpool on Monday and produced the Black Cats’ best two moments of the opening 45 minutes with shots from distance which only just missed the target.

However, it was the visitors who carved out the best opening when Scott Arfield slid Sam Vokes in behind the home defence with 15 minutes gone and keeper Vito Mannone had to block with his legs.

Sunderland enjoyed plenty of possession thereafter, but were able to create little of note with Javier Manquillo squandering a good opportunity five minutes before the break when he drilled a cross high over Jermain Defoe’s head when he had time to pick out a telling pass.

Sean Dyche’s men returned in much more determined mood, but a greater share of possession was wasted by a lack of precision when it mattered and they were almost made to pay when Defoe sent Rodwell into the box and defender James Tarkowski had to hack the midfielder’s cross away.

Pope had to produce a fine fingertip save to keep out Rodwell’s 57th-minute piledriver, but Denayer’s timely interception denied Andre Gray a free run at goal after substitute Michael Kightly had picked out Vokes on the right.

Tarkowski powered a header against the post from Steven Defour’s corner with 15 minutes remaining with Burnley, lifted by substitutes Jeff Hendrick and Ashley Barnes, finishing strongly but to no avail.