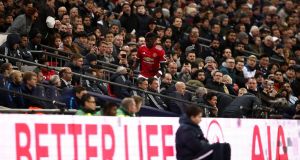 There was a strange and strangely protracted period in the modern history of the England football team when coaches, spectators and pundits became collectively convinced that something called “the left-sided problem” existed.

With some justification. The left-sided problem was undeniably a problem, but not perhaps the problem it thought it was. It rested on a series of inviolable assumptions. First, that football can only be played in rigid lines, like an artillery-backed three-day advance on the western front. Second, that only the left-sided peg in that flat midfield line can “provide width”. Third, that providing width effectively always means going outside rather than inside.

And finally if this set of orthodoxies cannot be satisfied, for example if there is no adequate left winger, the only conceivable response is to keep on doggedly banging your head against it, like a bunch of deluded medieval navigators staring furiously at their flat earth map, wrestling hopelessly over their ongoing “lack of an upside-down sailing ship” problem.

Eventually the left-sided problem just disappeared, submerged by the unavoidable evidence of European club football that midfield positions were fluid, that players could interchange, that “inverted” wide players could be more effective anyway.

There is an echo of this now in attitudes to the Premier League’s most interesting current problem position, the strangely ill-defined matter of central midfield. And in particular in the hysterical, always punitive way the performances of Paul Pogba and others have been critiqued in recent weeks.

Welcome, Paul, to The Central Midfield Problem, source right now of a fair amount of head scratching, of managerial make-do-and-mend, and of its own share of rage from the sidelines.

There is something brilliantly reassuring in the fact even central midfield can become a source of such confusion, another sign of football’s limitless complexity.

But this is the case now in the Premier League, where central midfield is the new frontier. In the past 10 days there have been four notable performances in that role, drawing wildly contrasting reviews.

First Pogba ambled all round Wembley, jitterbugging past his man on the wing, surging out at every break and drawing the ire of his own manager for failing to interpret the role in sufficiently rigid terms.

Opposite him Moussa Dembélé, who also has an all-round dribbling and passing game, was positionally conservative and physically fierce, operating as something more closely linked to his partner, shoulder to shoulder with Eric Dier.

A week later Aaron Ramsey also rampaged, Pogba-style, but against weaker opponents – Everton – and with better execution, scoring a hat-trick and getting away with rarely supporting Granit Xhaka.

Finally, on Monday Tiémoué Bakayoko, whose confidence looks utterly shot, played central midfield for Chelsea as though the position was still in the process of being invented, without an instruction booklet, and with half a million people yelling in its ear.

Which in a sense it is. The central midfielder who isn’t a defensive specialist. The guy who stands near N’Golo Kanté but isn’t N’Golo Kanté. The one we expect to provide a bit more, but not too much more, and some of the same. What exactly do we call him now? And what do we want him to do now?

Arguably this is the last really undefined position left on the Premier League pitch. We know what modern full-backs are meant to do. Even the goalkeeper has had a makeover, with his stepping out, his “advanced distribution”.

Whereas central midfield often seems to have something of the old orthodoxies, of one to get it and one to give it. There is still the idea of a central midfielder who can “run” a game, as Pogba is expected to, never mind the fact football has become so much more complex and positionally disciplined, more a fiercely collective thing. Trying to “run” a game can be a good way of trying to lose it too, so fine are the margins.

So pity the other central midfielder. We know what Kanté does, what Casemiro does. The defensive role is easy to praise, easy to understand. As for Pogba, Bakayoko, Ramsey and others, the job is to judge exactly what spaces to occupy, what gears to shift into.

This can vary wildly even within a single game. Liverpool’s solution right now is to play three central midfielders who do a bit of everything, blocking and driving forward as the game requires, which is a hugely demanding role.

Little wonder a player such as Emre Can can look brilliantly effective at times, at others like an abandoned corner sofa fly-tipped in the middle of a three-lane highway.

Manchester City have mitigated this problem by dominating possession, and by moving their two best ball-players, Kevin De Bruyne and David Silva, into deeper central roles.

But they have also looked solid with Fernandinho and Ilkay Gündogan both in the pocket. And recent history suggests this is the best way: intelligent team defence rather than driving big-ego midfielders.

Beyond this, at times it looks as though we have a mini-generation of lost boys, big-name, big-money central midfielders, with the gifts and the brio to drive forward, to try and shape a game, but asked to fill a much more nuanced, evolving, essentially defensive role.

Like every problem in football, this one will resolve itself, or be subsumed by other changes.

Right now it is a fascinating lacuna, a subplot to almost every game, and a role that perhaps deserves a little more in the way of sympathy for those attempting to define and rework the position simply by playing it. – Guardian