Republic of Ireland to take on Northern Ireland in November friendly 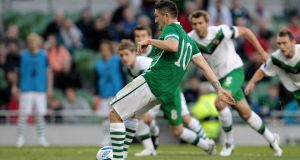 Robbie Keane scores his second goal from the penalty spot in the friendly international against Northern Ireland in May 2011. The teams will meet again at the Aviva Stadium in November. Photograph: Cathal Noonan/Inpho

Martin O’Neill’s Republic of Ireland side will face Michael O’Neill’s Northern Ireland in a friendly international at the Aviva Stadium on Thursday November 15th.

The FAI also announced a friendly away to Poland on Tuesday, September 11th, while there will also be a home friendly in June, with the opposition to be announced later this week.

The November game will act as a warm-up ahead of the final Nations League matches in November, with Northern Ireland playing Austria in Belfast on the following Sunday and the Republic taking on Denmark away on Monday, November 19th.

Michael O’Neill said: “Uefa have made it mandatory that we play a friendly on that date and when we looked at the options across Europe, travelling to Dublin to play the Republic of Ireland made a lot of sense.

“It means that we can stay on the island for the week, train in our usual environment and play a game that will be a good test for us ahead of the Austria match.

“Both countries qualified for Euro 2016 and both narrowly missed out on qualification for Russia, so it will be an evenly matched and hard-fought contest.

“From a personal point of view, I am looking forward to managing a team against Martin, a manager who I hugely respect and admire.

“Qualification for Euro 2020 is our number one priority now and with the Nations League a potential route to the tournament, this game means that we will be as prepared as possible for the Austria match.”

1 Betting shops face uncertain future as they prepare for Monday reopening
2 Tianna Bartoletta: ‘After you’ve gotten your medal, you become black in America again’
3 Mature Ringrose keeping the ups and downs of rugby life in perspective
4 The Irish Times shutdown sports quiz: Part three
5 Ian O’Riordan: An education in race and running during college days in America
Real news has value SUBSCRIBE
Crossword Get access to over 6,000 interactive crosswords