Emiliano Sala: Humble forward who had found his best form

Cardiff City's chief executive Ken Choo said the Premier League club was sad and concerned that a light aircraft carrying new signing Emiliano Sala had disappeared as it flew to Britain, and that they were hoping for positive news. 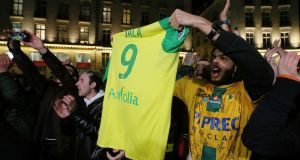 Supporters gather in Nantes to pay tribute to Emiliano Sala. The striker had just left the French club to join Cardiff City when the plane on which he was travelling went missing. Photo: David Vincent/AP Photo

Outside of Paris, goals can be rare in Ligue 1. But since joining Nantes, Emiliano Sala has scored more than most. He was outstanding in the first half of this season and attracted interest from abroad. Having travelled to Wales twice to agree a potentially career-defining transfer with Cardiff, he returned to Nantes to say goodbye to his teammates on Monday night.

“The last goodbye” was the caption Sala put on a social media post of himself surrounded by them at the club’s training ground before he was driven to the airport for his return to Wales and Premier League football by Nicolas Pallois, a Nantes defender and close friend. Sala was due in Cardiff by 9pm but never arrived after the plane in which he was travelling disappeared over the English Channel.

Sala was born in Santa Fe in Argentina but has called France home since his teenage years. Five years spent at Bordeaux’s partner club, Proyecto Crecer, in Argentina eventually brought him to Les Girondins in 2010. He scored 18 goals on loan with the third-tier club Orléans in 2012-13, which convinced the Ligue 2 team Niort to take the young forward, again on loan, for the following campaign. Another 18 league goals earned him a place in Willy Sagnol’s Bordeaux senior squad for the 2014-15 season.

Sala discovered a second family in Bordeaux. Marcelo Vada, the club’s under-16s coach, also an Argentinian, and his son and fellow Proyecto Crecer graduate, Valentin, housed Sala during his time at the youth set-up at Bordeaux. Valentin, who became like a younger brother to Sala, tweeted on Tuesday morning: “Come on, brother! Please return.”

Yacine Bammou, who played up front with Sala at Nantes, also felt a sense of brotherly loss when he heard the news. “It’s really very hard, even for those around me. He often came to my house, he was my brother.” Bammou had been in contact with Sala two days previously: “I spoke to him on FaceTime. I congratulated him on signing. We had a good laugh.”

Sala started the 2014-15 season at Bordeaux but, after one goal in 11 appearances in Ligue 1, he was sent on loan again, this time to Caen, where his performances improved. Sala scored five times in the second half of the season, including in a 2-2 draw with PSG. Nantes were sufficiently convinced to spend €1m to acquire his services that summer.

His form was a little undulating during his first season with Les Canaris, but six goals made him their leading scorer in Ligue 1. He grew into his role at the club. Trusted with responsibility as the sole forward by a host of managers, he became ever more efficient. Bullying defenders with his physicality and supreme aerial ability, Sala scored 12 in each of the next two seasons.

This season, however, Sala has been a revelation. A familiar total of 12 goals was reached in less than half the time it took the year before. He remained one of few constants during a tumultuous season for Nantes. Despite not being an ever-present in the starting XI under Miguel Cardoso, Sala was prolific, seemingly scoring every opportunity given to him – whether off the bench or not. At one stage only Kylian Mbappé had a better goals-to-minutes ratio in Europe’s top leagues.

Vahid Halilhodzic replaced Cardoso in October and, under the guidance of the Bosnian manager, Sala often proved unplayable. His devastating hat-trick against Toulouse was a highlight and his goal in a 3-2 win against Marseille showed – as he has many times of late – that he was becoming an all-round forward of genuine top quality. With the goals flying in, at one point he was the most prolific Argentinian forward in Europe’s top leagues – no small feat considering the competition.

His tally of 42 league goals in three and a half years generated interest from abroad and Cardiff eventually reached an agreement with Nantes. Sala, who had been happy in the city and was not seeking a move, initially considered only clubs that could offer him European football. He turned down a move to China that would pay three times as much as Cardiff as he had given the Welsh club his word that he would sign.

Sala’s transfer to the Premier League may have proved career-defining. His Twitter profile already featured him smiling giddily in a blue Cardiff shirt. As his devastated father, Horacio, explained on Argentinian TV: “For him, like for us all, his transfer to Cardiff was a big step. He is a boy who has always fought hard. A humble boy. I cannot believe it. I am desperate … I do not know what will happen … I hope that good news will come. My family knew nothing. I had to tell them.”

Humble yet driven; that sums up Sala. His imposing presence was difficult for defenders to handle but he is adored by his former teammates and colleagues. As the Nantes president, Waldemar Kita, said on Tuesday morning: “He was a polite, kind and adorable boy, loved by everyone.” Patrice Garande, who managed him at Caen, said: “I have been in front of the news since this morning; I am waiting. I cannot bring myself to believe it – this is not possible. This boy made my life an absolute pleasure on and off the pitch for six months.”

As Bammou explained, Sala always improved the atmosphere at Nantes: “In the dressing room and in everyday life he was the first to tease. He made a lot of jokes.”

We may never know how Sala would have fared in Cardiff and the Premier League, but his combination of boundless enthusiasm and optimism on the pitch and off it, alongside a largely media-shy persona, left an indelibly positive mark on anyone who played with or coached him. The outpouring of affection and hopeful messages articulated on social media or in interviews across Tuesday from teammates, clubs, managers, fans and officials across France and beyond – with many players simply tweeting “Emi …” – is testament to this. Sala had worked hard to achieve his goals and his career had just started to blossom. His star will continue to shine brightly, no matter what. – Guardian service