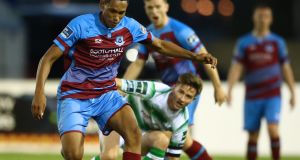 Drogheda’s William Hondermarck has made the move to Norwich City. Photo: James Crombie/Inpho

Norwich City have confirmed the signing of 18-year-old midfielder William Hondermarck who had attracted interest from a number of British clubs after an impressive debut season at Airtricity League first division side Drogheda United.

“It feels like a dream,” said the teenager as the news was announced through the club’s website. “To have the chance to be involved in an environment like this is amazing for me.

“I’ve had a really successful trial period here. It’s been hard work with the quality and double sessions, but I’ve enjoyed every minute so far.

“I knew of (striker) Adam Idah before I joined because he has played a lot for Ireland in the past. The group here is so friendly and they’ve given me a really warm welcome.”

Hondermarck established himself as something of a regular for Drogheda last season after catching the eye in the club’s surprise cup defeat of Shamrock Rovers which was only his second ever senior appearance.

He had been linked with both Dundee United and Brentford but joins Norwich after having impressed in a number of under-23 games for the club, including Monday night’s 1-1 draw against Leicester City in which he came on after 58 minutes.

Ali Reghba missed that game but after having scored twice in last week’s 3-0 defeat of Swansea City, Leicester still appear to be intent on signing him. The FAI are understood to be contacting his former clubs, including his most recent one, Bohemians, where he started to break into the first team towards the end of the season, and Shelbourne, so as to assess what compensation will be payable for the under-19 international.

Hondermarck, who was born in France but lived in Ireland since early childhood, has yet to play international football, is expected to be available for selection in the future and could make his debut in the spring. In the meantime, he goes straight into the squad for Norwich’s FA Youth Cup game at Preston this evening.

“I’m very excited. I’ve watched the competition on television quite a lot and I know a lot about how well Norwich have done recently.

“I never imagined that I would be playing in it one day. I’m so excited to be part of it.”