England international has suffered his third hamstring injury of the season 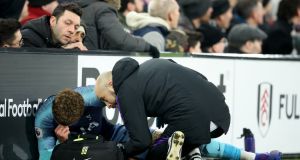 Tottenham have suffered more injury woe with news that Dele Alli is out until early March with a hamstring injury.

Alli sustained the problem in Sunday’s 2-1 win at Fulham and it is the third such injury he has suffered this season.

He went down clutching his hamstring in the final few minutes at Craven Cottage, having earlier scored the equaliser, and scans have confirmed Spurs’ worst fears.

He joins his England team-mate Harry Kane in the treatment room and is set to miss the club’s Carabao Cup semi-final second leg with Chelsea, and the potential final, the Champions League last-16 first leg against Borussia Dortmund, the FA Cup fourth-round clash at Crystal Palace and a host of important Premier League games.

The club posted on Twitter: “Following scans and clinical assessment, we can confirm that dele_official has suffered a hamstring strain, sustained during Sunday’s match.

“Dele will now undergo a period of rehabilitation with our medical staff, with the expectation of returning to training in early March.”

It robs boss Mauricio Pochettino of another attacking option as, along with Kane’s ankle ligament injury, Son Heung-min is away with South Korea at the Asian Cup.

Son played as South Korea beat Bahrain after extra-time on Tuesday to extend his stay at the tournament by at least another week.

Lucas Moura is nearing a return from a knee injury and Pochettino might feel he has no choice but to throw him back into action at Stamford Bridge on Thursday as Spurs try to hold onto their 1-0 first-leg lead in the League Cup semi-final.

Alli has already endured two spells on the sidelines this season with hamstring problems as injury continues to ravage Tottenham’s season.

That injury nightmare has drawn further attention to their lack of activity in the summer transfer window and Pochettino was insistent that the club would not buy this month following Kane’s injury last week.

However, that question will surely be asked of him again following news of Alli’s six-week absence.