Spurs manager is without Harry Kane and Son Heung-min, but Lucas Moura may play 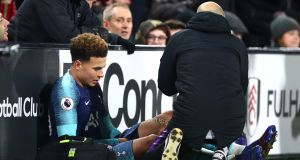 Dele Alli of Tottenham is injured during their Premier League match against Fulham at Craven Cottage on Sunday. Photograph: Clive Rose/Getty Images 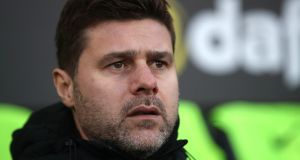 Mauricio Pochettino admitted the hamstring injury which forced Dele Alli out of Tottenham’s 2-1 win at Fulham did “not look great” as he faced up to the loss of yet another key attacking player.

Spurs play Chelsea in the Carabao Cup semi-final second leg at Stamford Bridge on Thursday, leading 1-0 from the first leg, and Pochettino is already resigned to being without Harry Kane, who has an ankle ligament injury, and Son Heung-min, who is on international duty with South Korea at the Asian Cup.

Pochettino said that Lucas Moura, who missed the Fulham game because of knee trouble, should return at Chelsea but he will miss the midfielders Moussa Sissoko (groin) and Victor Wanyama (knee), while he now faces an anxious wait over Alli.

Pochettino appeared to concede that the manner in which Alli reached back to feel his hamstring in the 86th minute, as he chased a ball into touch, made a lay-off inevitable. The manager has already made it clear that he does not consider a move in the January transfer market to be either realistic or the right thing to do to answer what has come to feel like a selection crisis.

It’s not a worry, it’s a massive opportunity for different players. We’re going to go to Chelsea expecting to win

“We need to assess Dele in the next few days but the hamstring is a muscle that you need to be careful with – in terms of the mechanism of the injury,” Pochettino said. “We need to assess but, of course, it does not look great. On the pitch I think we all agree that when you see him put his hand on his hamstring, it’s a situation where you feel . . . it’s not great to see that.”

Pochettino, who did welcome back Eric Dier as a substitute after appendix surgery, maintained that injuries can offer chances to other members of his squad, even if resources are being stretched to breaking point.

“It’s not a worry, it’s a massive opportunity for different players,” Pochettino said. “We’re going to go to Chelsea expecting to win. We hope it’s not a massive issue with Dele but the most important thing is to believe. Lucas trained today at the training ground. We didn’t want to risk him against Fulham but he’s nearly 100 per cent. Maybe it’s not going to be Dele but we are going to have Lucas on the bench or maybe from the beginning.”