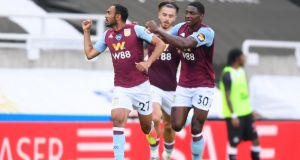 Ahmed Elmohamady and Steve Bruce go back a long way. The Egypt right back has been signed by Newcastle’s manager at three clubs and some on Tyneside were surprised he did not follow his mentor to the north east last summer.

Instead, Elmohamady stayed put at Aston Villa and on Wednesday night he bit the hand that once fed him by heading Conor Hourihane’s splendidly whipped-in corner beyond Martin Dubravka, arguably at fault, to earn Villa a potentially vital point in their bid to avoid relegation.

In cancelling out Dwight Gayle’s opener, he also denied an old friend the chance to properly get his own back. Revenge comes in many forms and, true to his essentially affable, largely forgiving, character, Bruce sought a rather gentlemanly form of attrition against the club that sacked him almost two years ago. Before kick-off Newcastle’s manager and his assistant, Steve Agnew, were seen laughing and joking with Dean Smith, Jack Grealish and John McGinn but no one was deceived entirely.

Villa had ignored Premier League advice to fly to games on the morning of games and instead took off from Birmingham airport on Tuesday lunchtime, enjoying an overnight hotel stay on Tyneside.

The rest seemed to have done them good as Trézéguet’s early half-volley flew off target after his connection with Ezra Konsa’s gorgeous delivery.

When Konsa subsequently curled another fine cross in Mbwana Samatta’s direction, the striker should have headed Villa into a deserved lead, but Samatta appeared fractionally slow to react and his sub-standard flick flew well wide, leaving Newcastle reprieved.

On a still and unusually warm summer night Grealish, Konsa, Tyrone Mings and company looked anything but relegation candidates. Fluency personified, they left the home side chasing the early-evening shadows.

Every Villa pass seemed to come with incision and precision and Mings commanded his defence with authority to leave even a free spirit in the mould of Allan Saint-Maximin cowtowing and conforming.

More than a little one-paced, Newcastle underwhelmed until late in the first period when, most notably Saint-Maximin, they finally began to show signs of emerging from hibernation.

Until Mings showed his class courtesy of a splendid, possibly goal-preventing tackle on Joelinton, they had their fair share of possession but failed to do too much with it.

Indeed, Newcastle’s biggest opportunity arrived when, with half-time fast approaching and Jonjo Shelvey shaping to take a free kick, Douglas Luiz’s arguably looked to have butted Jamaal Lascelles as the players jostled. A lengthy VAR review ensued and the verdict was a yellow card.

As the breeze picked up Joelinton was replaced by Andy Carroll. Could the finally fully-fit striker – set to sign a new one-year deal – whip up the wind of change his side needed?

Just to be on the safe side Bruce also introduced a Gayle – Dwight in place of Ritchie, as he sought to tilt the power balance.

Talk about an inspired pair of substitutions. Gayle had barely been on the pitch a minute when his low, angled, right-foot shot passed through Nyland’s legs to give Newcastle the lead. Mings, for once, was confounded by Carroll’s clever curved pass. No wonder Bruce – who is probably now ruing not recruiting Elmohamady for a fourth time – wants to keep him and Gayle. – Guardian