Despite heavy first touch Romelu Lukaku has plenty to offer 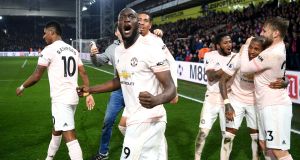 Romelu Lukaku’s two goals against Crystal Palace on Wednesday took him to 111 in the Premier League, level with Dion Dublin as the 20th most prolific scorer in the competition’s history. This was only the fourth time he has completed 90 minutes under Ole Gunnar Solskjær and they were his first goals in almost two months, and yet there is a sense Lukaku as much as anybody is benefiting from the burst of Norwegian sunshine over Old Trafford.

Perhaps it does not seem like much for the 10th most expensive signing in history to pull level with the presenter of a daytime-TV property show. It should be acknowledged there is some evidence football was played before 1992 and some forwards may have amassed many more goals before the Premier League existed. But still, Lukaku now stands only two goals behind Ian Wright (who admittedly was 28 at the start of the first Premier League season) and nine behind Steven Gerrard in the overall rankings. He is 25.

There is something slightly unsettling about Lukaku. He is a player who seems to draw disproportionate criticism. There is something about him that feels unconvincing. His first touch occasionally seems heavy. His movement at times seems unimaginative. He is capable of missing fairly straightforward chances, as he did early on at Selhurst Park.

But then he is also capable of executing finishes such as the two that brought his goals. Receiving the ball from Luke Shaw for the first, he let the ball run outside his right foot, which took him away from Martin Kelly but not near enough to James McArthur for the midfielder to make a block, while also giving him enough space to shape the ball round James Tomkins and into the bottom corner past Vicente Guaita, who was probably unsighted by the defenders. It was somehow both clinical and graceful.

The second demonstrated great awareness even before the skill of the finish. As Victor Lindelöf’s header dropped, it would have been easy for Lukaku to come to the ball, to challenge Jeffrey Schlupp. Instead, he read the trajectory and let the ball drop over his shoulder, using his body to hold off Schlupp, and then had the athleticism and technique to get over the ball at the top of its bounce and hook it past Guaita.

So what then, is the problem? Lukaku scores goals consistently, getting into double figures in the league in each of the past seven seasons, something all the more remarkable given only two have been spent with a “big six” side. He has a remarkable range of attributes, technical and physical. The issue, perhaps, is that he is not quite what he appears to be. The most striking thing about Lukaku is his size. He has the physique of a classic target man, and that allows him to do things that are impossible for others. And yet he is not a target man.

He can play with his back to goal but it is not necessarily his preferred position. There were times under José Mourinho when he became isolated. Some players thrive on that. Salomón Rondón, for instance, the bulk of his international experience with Venezuela being not only as a lone forward but as a lonely forward, is adept at playing as far away from his teammates as possible, relishing the challenge of turning a loose ball into a free-kick or a throw-in.

But that is not Lukaku. His best two performances in the past 12 months have probably both come on the right wing, for Belgium against Brazil in the World Cup quarter-finals and for United at Arsenal in the FA Cup. On neither occasion was he playing as an orthodox winger; both times his job was essentially to stay high up the pitch behind an attacking left-back. On both occasions he was devastating on the counter. Lukaku may have a chest that seems to demand the ball be pinged into it but he is probably better with the ball played in front of him.

There are those moments of occasional clumsiness. Perhaps they are the result of an occasional loss of concentration but such aberrations do seem to be a feature of big players in general, as though it is very difficult when bulk begins to go the wrong way to make the necessary adjustments.

In target men, that might be forgiven, but there Lukaku falls victim of the underlying recognition that he is an all-round striker, simultaneously both target man and not target man so nobody knows quite what standards to apply. It is worth remembering, though, amid all the doubts, that the only player younger than him who has scored more Premier League goals is Harry Kane, who was born 10 weeks after Lukaku.

He scores goals, is tactically adaptable, capable of technical excellence and happens to be big and strong as well. Perhaps he is not such an obvious part of Solskjær’s vision as the more mobile trio of Marcus Rashford, Anthony Martial and Jesse Lingard but as a back-up and a more physical option, Lukaku still has plenty to offer.