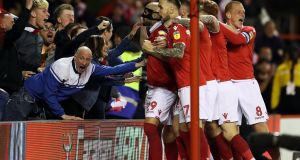 Yohan Benalouane of Nottingham Forest is congratulated on his goal during the Championship win over Derby County at the City Ground. Photo: Matthew Lewis/Getty Images

The French defender, sporting a mask to protect a facial injury, scrambled home an early effort which was enough to not only secure bragging rights over the Rams, as well as the Brian Clough Trophy, but also boost their play-off hopes.

Martin O’Neill, savouring his first East Midlands derby as Forest manager, made just the one change, with skipper Ben Watson returning in place of Lewis Grabban, who was ruled out with an Achilles injury. Andy King came in for Craig Bryson in Derby’s only alteration from the side that lost 1-0 to Millwall.

Forest enjoyed a blistering opening, taking the lead after barely 70 seconds. Joe Lolley’s inswinging free-kick was headed up into the air by defender Jayden Bogle and in the ensuing panic, Daryl Murphy headed the ball across to the far post where it was bundled in by Benalouane.

Murphy headed over from Jack Robinson’s long throw before the Rams missed a glorious chance to equalise after 13 minutes. Duane Holmes slipped the ball through a sleeping Reds backline for Martin Waghorn to run on to but as Costel Pantilimon came out to narrow the angle, Waghorn curled his effort well wide of the target.

Forest wasted a great opportunity as play immediately switched to the other end. Lolley took advantage of a defensive error and played in Murphy who, with just Kelle Roos to beat, took too heavy a touch and the visiting keeper was able to gather the ball.

Roos saved comfortably from Lolley, before Holmes shoved Ryan Yates to the ground after a late tackle by the Forest midfielder. Both players were booked.

In a predictably feisty affair, Forest were managing to keep their bitter rivals at arm’s length and nearly doubled their lead when the onrushing Yates reacted brilliantly but nodded Lolley’s cross-shot inches wide.

Derby made a change at half-time, bringing Florian Jozefzoon on for Tom Huddlestone, and the Dutchman tested Pantilimon four minutes after the break.

After a lengthy stoppage for treatment to King, who had to be replaced by Bradley Johnson, the Reds made their first attack of the second half and it was dangerman Lolley who fired an effort just wide of Roos’ right-hand post.

With Forest sitting deep and inviting pressure, the Rams were enjoying a lot of possession but creating little and Lolley launched a counter-attack after a Derby move broke down. After running 50 yards up the pitch, though, he hammered a shot well over.

Derby were then awarded a free-kick 12 yards outside the Forest box as the game entered its final throes but to sum up the the visitors’ night, Waghorn’s delivery failed to trouble Pantilimon as he caught the ball above his head with little difficulty.

Johnson then hooked a shot over as he pounced on Pantilimon’s punched clearance and Forest saw the game out comfortably after that.