Denis Law: Bobby Charlton ‘one of the best players ever’ 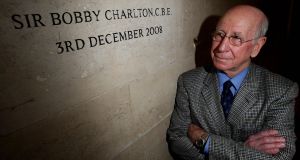 Denis Law hailed Bobby Charlton as “one of the best players ever” ahead of the England and Manchester United great’s 80th birthday.

A man rightly revered by club and country, a World Cup winner, European champion and all-round gentleman will celebrate the milestone on Wednesday.

Charlton scored 49 goals in 106 appearances for his country and, most pertinently, spearheaded them to World Cup glory on home soil in 1966.

It was the peak of a career in which he served with distinction for 17 years at United, with his all-time appearance and scoring records only falling to Ryan Giggs and Wayne Rooney in recent years.

His achievements have been recognised in a variety of ways. He was knighted in 1994, the South Stand at Old Trafford was renamed in his honour and a statue of Charlton alongside Red Devils team-mates Law and George Best is situated just outside the stadium.

The trio scored 665 goals between them for United and Law loved playing with Charlton as much as he loved the man himself.

“What a fantastic player, what a fantastic guy,” the former Scotland striker said. “He deserves everything he has been awarded with. He is one of the best players ever.

“We’ve always had connections along the way. You never forget people like Sir Bobby.

“Don’t forget, the television wasn’t about in those days like it is today so the fact that he is known all around the world just shows how great a player and person he is.”

Law especially admires how Charlton stood strong after surviving the 1958 Munich disaster in which eight of his United team-mates perished.

“The Munich disaster rebounded right around the world and, you know, you just think ‘dear, dear, it’s just so close – I must go and see these guys’,” said Law, who was then playing for Huddersfield and went to United’s first match after the tragedy.

“I was at the first game. I think a ticket was about 50p but we paid about four quid for it. It was an expensive evening.

“But then to think a few years later I joined the club and was playing with the likes of Sir Bobby and George Best, Pat Crerand and the team that we had — we just had a wonderful time.

“It’s not easy, but it is easier to play the game of football when you play alongside players like Sir Bobby and George Best and the ones that I have mentioned.”

Law also credits Charlton for helping him to his own exceptional United goals tally of 237 in 404 matches, which places him third on the club’s all-time list.

“When Bobby had the ball I knew where it was going,” Law said.

“He had such a strong shot, really, that when he was outside the penalty area lining up for a crack at the goal — I knew that the keeper might save it, but there was a fair chance he might drop it because it was (hit) so hard.

“Every day Bobby was there, I was lining up to sort of pick up the scraps.

“Right enough, five out of 10 times the goalkeeper would drop the ball for me and I’d just need to knock it into the back of the net.

“We had a good relationship. For what he has achieved, he has never changed at all.

“He’s one of the nicest guys you could wish to meet.”