Ireland Under-19s come from behind to beat Serbia 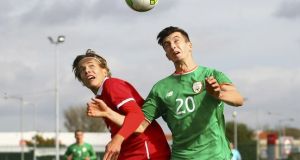 Republic of Ireland Under-19s have qualified for the Uefa European Championship Elite Round following a 2-1 win over Serbia in Waterford RSC this afternoon.

Tom Mohan’s side topped the group with seven points from nine thanks to Tuesday’s win. Ireland now enter the Elite Round as one of the top seeds with progression to the Finals the target for the side.

A tight battle in the RSC came to life as Serbia took the lead in the 29th minute with a brilliantly taken goal. Jayson Molumby was penalised for a tackle on the edge of the area and Luka Ilic stepped up to curl the resultant free kick in off the underside of the crossbar.

Ireland came out flying after the restart and got their reward within 15 minutes as Lee O’Connor headed Tom Mohan’s side level. The pressure continued to mount on the Serbians with Jonathan Afolabi a constant threat up top for Ireland.

The comeback was completed in the 70th minute when UCD attacker Neil Farrugia nipped in to put Lee O’Connor’s knockdown past Aleksandar Popovic in the Serbia goal.

Speaking after the game, Ireland Head Coach Tom Mohan was delighted with his team’s performance.

“Serbia are always a top side in underage European football,” he said. “For our boys to go 1-0 down and come back show the spirit and the character in the group. We dominated the second half, our boys dug in, kept the ball well and converted our chances when we created them. We’re very pleased.

“There is great ability in the group. We are producing good players, no matter what anybody says, and there are plenty of positives to take from the campaign.

“Although we didn’t score in the first game we probably created more chances than any other game. The Cyprus game gave us a massive boost when we needed it and that set us up nicely for today. We are number 1 seeds going into the Elite Round draw and that is hugely positive.”