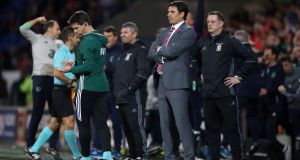 Chris Coleman has met senior players and has been urged to stay on as Wales manager despite the failure to qualify for next year’s World Cup finals in Russia.

According to reports in the British media on Tuesday, Coleman met with key players — including the injured Gareth Bale — at the team hotel following their 1-0 defeat to the Republic of Ireland in Cardiff.

The squad have given their unanimous support to Coleman and it is also understood that the Football Association of Wales is hoping Coleman extends his near six-year stay at the helm.

Coleman said in the immediate aftermath of the Ireland defeat that he would hold talks with the FAW over his future.

Those talks are set to take place in the next few weeks, ahead of a planned November home friendly which sees Mexico and the United States topping the list of potential visitors to Cardiff.

Coleman said after Wales had reached the semi-finals of Euro 2016 that the 2018 World Cup campaign would be his last in charge.

But his stance appears to have softened in the last 12 months and Coleman could be open to the idea of changing his mind and leading Wales into the Euro 2020 campaign.

The 47-year-old certainly has the backing of his players with defender Chris Gunter calling for the FAW to “give him a really good contract and make him stay”.

“I think everyone in Wales, fans and players, would want to see him stay on — 100 per cent,” Gunter said.

“He’s been a massive part of what we’ve done and he is the man to hopefully take us forward.

“If the powers that be can give him a really good contract and make him stay, he can carry on being the greatest Welsh manager of all time.”

The former Fulham and Real Sociedad boss endured a tough start to his reign with a 6-1 defeat in Serbia the low point of a miserable 2014 World Cup qualification campaign.

But Coleman turned around Wales’ fortunes in dramatic fashion in Euro 2016 qualification.

Wales qualified for their first major tournament in 58 years — and then made it all the way to the semi-finals in France.

“We want him to stay because what he’s given this nation is something that’s never been done before,” Gunter said.

“The message from the whole squad would be that we want him to sign a new contract.

“But international football is weird, we all have to go back to our clubs now and we’ll be told what’s happening in the next two or three weeks.”

Wales’ first competitive defeat at home for four years means that the nation’s long wait for another World Cup finals appearance goes on.

Next summer’s tournament in Russia will mark the 60th anniversary of Wales’ only previous finals appearance in Sweden in 1958.

But Gunter insists the future is bright for Welsh football, saying: “We’ve all had disappointments in football before and you get a lot more lows than highs.

“That’s why you need to enjoy the good times and use these defeats to move forward.

“You always seem to have another chance to do something and we want to build on what’s happened in this campaign.

“It’s not the end of Welsh football — we’re not going to go away, we’re here to build on what we’ve done.

“There’s young players coming through and a very nice blend in the squad.

“We’ll be back here having more big nights, I’m sure about that.”

1 Gordon D’Arcy: If Farrell can tap into our self-worth, we’re all on a winner
2 Winds of change as Ireland name a refreshed team, picked on form
3 Who is Caelan Doris? Meet Ireland’s newest rugby star
4 Ireland v Scotland: Murray keeps Cooney at bay in starting lineup
5 Sean O’Brien 4.0 - Leinster starlet ready for Under-20 debut
Real news has value SUBSCRIBE
Crossword Get access to over 6,000 interactive crosswords