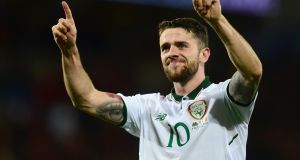 Fifa have confirmed they are to investigate an incident between Robbie Brady and Ashley Williams during Ireland’s 1-0 win over Wales on Monday night.

Ireland midfielder Brady is alleged to have headbutted the Welsh captain in the back during the final World Cup qualification fixture in Cardiff.

According to Sky Sports, Fifa will review the incident this week, before deciding if Brady should face any disciplinary action.

And he now faces a nervous wait to see if he will be available for Ireland’s World Cup playoff clash in November.

Martin O’Neill’s men edged out Chris Coleman’s side at the Cardiff City Stadium thanks to a James McClean goal, securing second place in Group D in the process.

They will find out their playoff opponents when the draw is made on Tuesday October 17th in Zurich.

Among their possible opponents are Italy, Croatia, Denmark and Portugal or Switzerland.