Cunningham and Browne keep Preston on the front foot 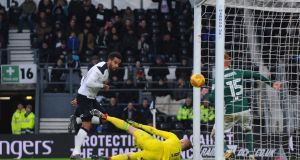 Goals from Republic of Ireland internationals Greg Cunningham and Alan Browne helped keep Preston within three points of the Championship playoff places after recording back-to-back wins with a 2-1 victory against Hull at Deepdale.

Hull, who dropped into the bottom three after Bolton’s victory over Bristol City on Friday, took the lead courtesy of Jarrod Bowen’s 29th-minute strike.

Cunningham brought Preston back level after 36 minutes and Browne’s penalty just before the break sealed the three points.

Tom Huddlestone inspired Derby to a 3-0 victory over 10-man Brentford which kept them in the automatic promotion places.

Huddlestone scored his first goal in 125 appearances and set up the second to help move the Rams to within eight points of leaders Wolves, who host Sheffield United in the late kick-off.

Brentford midfielder Sergi Canos was sent off midway through the first half and Huddlestone, capped four times by England, made them pay moments later.

The former Hull midfielder then had a hand in creating Derby’s second goal, which was finished by Cameron Jerome in the 34th minute, while Matej Vydra added a late third with a penalty.

Villa took the lead after 33 minutes when a fine team goal was finished by Irish striker Scott Hogan and Albert Adomah made it 2-0 in the 65th minute.

Ahmed Elmohamady’s own goal gifted the Brewers a route back into the game, but Jack Grealish restored Villa’s two-goal cushion late on.

There was still time for Liam Boyce to score for Burton but Nigel Clough’s side are rooted to the bottom of the table.

Neil Warnock returned to haunt his former club as Cardiff kept up their promotion hopes with a 4-1 win at 10-man Leeds.

Callum Paterson headed home after eight minutes for the Bluebirds and their lead was doubled by Junior Hoilett in the 41st minute.

The hosts’ day went from bad to worse at the end of the first half when Gaetano Berardi was sent off and Sean Morrison added a third to put Cardiff in complete control.

Sol Bamba’s own goal gave Leeds fans something to cheer after 54 minutes, but Republic of Ireland winger Anthony Pilkington rounded off the victory late on for fourth-placed Cardiff.

Fulham moved up to fifth after Lucas Piazon and Stefan Johansen scored second-half goals in a 2-0 win over Nottingham Forest.

Sunderland remain second bottom and are two points adrift of safety after a 2-0 home defeat against Ipswich.

Joe Garner broke the deadlock in the 35th minute and the Tractor Boys found themselves in the clear on the stroke of half-time courtesy of Adam Matthews’s own goal.

Birmingham edged four points clear of the relegation zone with a 3-1 victory at nine-man Sheffield Wednesday.

David Davis opened the scoring for the Blues in the eighth minute and Jota made it 2-0 midway through the first half.

Marco Matias was then sent off for the Owls in the 38th minute and Jota added his second just before the break.

Lucas Joao reduced Wednesday’s deficit in the 54th minute, but the hosts were reduced to nine men when Daniel Pudil was given a red card after 68 minutes.

Josh Scowen scored his first goal for QPR to help secure a 1-0 victory against his former club Barnsley.

Rangers were reduced to 10 men when Irishman Ryan Manning was sent off in the 71st minute, but struggling Barnsley failed to find an equaliser.

Norwich beat Middlesbrough, who had Rudy Gestede sent off in the first half, 1-0 courtesy of Tom Trybull’s goal, while Leandro Bacuna’s own goal and a Lee Gregory strike helped Millwall win 2-0 at Reading.