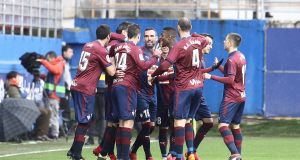 Eibar hammered Vincenzo Montella’s Sevilla 5-1 to move within a point of their stunned opponents in La Liga on Saturday.

Sevilla, who face Manchester United in the last 16 of the Champions League, were far from their best and Eibar, inspired by winger Fabian Orellana, took full advantage.

The Basque side, who are now one place behind Sevilla in seventh on 32 points, took 38 seconds to go ahead when Kike Garcia broke away and rifled an effort past Sergio Rico at his near post.

Orellana stabbed home the second goal in the 17th minute before Pablo Sarabia pulled one back for the visitors with a penalty for handball by Dani Garcia.

Sevilla were unbeaten in five games before Saturday’s match and seemed poised to mount a comeback but Ivan Ramis restored Eibar’s two-goal lead with a towering header from a corner.

Orellana grabbed his second after the break, with Anaitz Arbilla curling home a fine free kick to complete the rout and delight the home fans at the Ipurua Stadium.