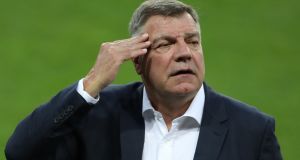 Sam Allardyce has made a swift return to football management after his ill-fated 67-day stint in charge of the England senior team, as Alan Pardew’s replacement at Crystal Palace.

The 62-year-old has agreed a contract through to 2019 worth around £2.5m-a-year, marginally less than he briefly earned with the national team, with bonuses applicable if he succeeds in steering the club to Premier League survival. Palace have lost eight of their last 10 games, and 22 over the course of the calendar year, to hover just a point and a place from the relegation zone and will hope to tap the talents of a manager who has never seen his team demoted from the topflight.

Allardyce travelled down from his home in Bolton to the south London club’s training complex in Beckenham on Friday afternoon and met the chairman, Steve Parish, to finalise the deal. He will oversee his first training session on Saturday, as well as their preparations on Christmas Day, and will be in the dug-out as Palace take on Watford at Vicarage Road on Monday having received assurances he will be able to bring in new players next month. The team is currently imbalanced by the absence of a senior left-back and need better cover at centre-forward and centre-half.

The former Bolton Wanderers, Blackburn Rovers, Newcastle United, West Ham United and Sunderland manager departed his position with the Football Association in September after only one match having been filmed discussing FA rules on third-party ownership by undercover reporters. He expressed only last week his intention to return to the game as soon as possible, telling beIN Sport “I don’t think I can leave it where it ended,” and had fielded tentative interest from clubs in China and agents claiming to work on behalf of Swansea City.

That impressed some urgency on Palace’s pursuit of his services, with the club’s American co-owners, David Blitzer and Josh Harris, having been made aware of his credentials late last month and increasingly concerned from afar over the threat relegation would pose to their investment. They were impressed by the level of detail, both on Palace’s current squad and potential targets for January, provided by Allardyce in a dossier supplied while the team were embroiled in a six-match losing streak, which culminated in a calamitous 5-4 defeat at Swansea City on November 26th.

Allardyce had indicated a desire to bring in his own coaching staff, but may lean heavily upon Pardew’s assistants, Keith Millen and Kevin Keen, in the short-term. They took charge of the squad’s preparations for the game at Vicarage Road on Friday, along with the goalkeeping coach Andy Woodman, following Pardew’s dismissal the previous day.

“Sam’s an experienced Premier League manager who he’s been successful,” said Millen. “He knows the game, he knows how to set a team up and did a great job at Sunderland keeping them up ast season. We’ve lost an experienced manager, but Sam is someone who has been there and done it.”

While the FA are still waiting to conduct their own investigation into Allardyce’s conduct during his brief tenure with the national side as they await the release of the relevant evidence, compiled by the Daily Telegraph, by City of London Police. Yet the authorities have already confirmed he will not be the subject of a criminal investigation and is therefore free to work again.