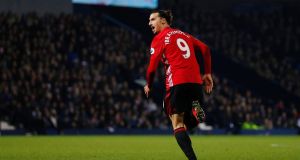 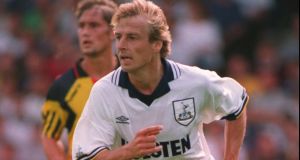 Jurgen Klinsmann scored 30 goals in all competitions in his single season in England and was named the football writers’ player of the year. Photograph: Allsport

Not only has Zlatan Ibrahimovic been flying the flag for combustible iconoclasts since his arrival in the Premier League, he has also been doing it for the oldies. At 35, the Swede is cocking a snook at the idea football is a young man’s game. He has scored 10 goals in his past nine games for Manchester United and generally been at the heart of their upturn in form. But the Premier League has a history of superannuated heroes. Here are 10 other memorable players who made their Premier League debuts in their fourth decade.

There may be other players who helped make the Premier League the sexy proposition it became in the late 1990s but none did so with quite the same joie de vivre as the Sardinian. His reputation had been forged before he arrived at Chelsea. But Zola’s seven years at Stamford Bridge were not a coda to his career but its most significant chapter. He became a player beloved more than any other at Chelsea for his character and the way he played; with a smile and a commitment to the team and to self-expression. Along the way Zola won the FA Cup, the Cup-Winners’ Cup and taught the English how to backheel.

An itinerant, charismatic international who turned up in England as part of a tour of Europe’s major leagues, in many ways Klinsmann set the template for the Premier League superstar. The German played one season before moving on to France and that self-mocking dive in his first match would be dismissed as a stunt nowadays. But Klinsmann was too good to be pigeon-holed as a careerist. He scored 30 goals in all competitions that single season and was named the football writers’ player of the year. Consistently graceful and funny off the pitch, Klinsmann brought a touch of sophistication that would linger.

Of all the fairytales to be told about the champions of England, Morgan’s is up there. Until four years ago, this centre-half looked most likely to be remembered for earning a testimonial at Nottingham Forest, the club where he had made his debut at 17 and gradually won the favour of fans sceptical of his uncomplicated skills.

Morgan never got that game, as he was sold to Forest’s local rivals for a modest £1 million in the summer of 2012. Since then he has become a Jamaica international, a Premier League player, a keeper of five clean sheets during the Great Escape and then, most improbably of all, captain of 2016’s all-conquering Foxes side. His header in a draw against Manchester United in April was the moment the impossible became the inevitable and no one deserved it more.

This goalkeeper was crazy. That much everyone knew when the occasional Germany international (Oliver Kahn’s permanent understudy) and the goalkeeper with the most red cards in Bundesliga history arrived at Arsenal.

Lehmann became better known as the rock-solid last line of defence in the team known as The Invincibles. Lehmann went on to break the Champions League record for most minutes without conceding a goal. Neither of these is a modest achievement. In the process he became the full-time Germany number one and, for the record, received only one red card in his five years at Arsenal. Okay, it came in their only Champions League final, that they went on to lose, but you can’t have everything.

Blackpool, Macclesfield, Stockport, Rochdale, Bristol Rovers – the list of clubs Lambert had played for before he began his ascent up the leagues with Southampton in the late noughties was just a little at odds with the prevailing model of academy training and endless loan spells. But Lambert proved that, even in the modern era, an instinct for goal is inbuilt. He scored on his Premier League debut against Manchester City, completing the set of England’s four divisions. The summer of 2013 brought an England call-up and a goal against Scotland with his first touch. A year later he went to the World Cup before being signed by Liverpool, the club which had rejected him as a schoolboy. That gave Lambert, at the age of 32, the chance to play in the Champions League. He scored, of course.

When the Holland goalkeeper arrived at Fulham it seemed a bit of an odd one.

Van der Sar had won the Champions League with Ajax but had just come off the back of an underwhelming spell at Juventus (who had brought in Gianluigi Buffon to replace him). Now into his fourth decade, did he really have the appetite to revitalise his career? The answer was clear: yes, and then some. After proving himself in the Premier League over four seasons, Van der Sar left Craven Cottage for Old Trafford, where he instantly solved a keeper problem Manchester United had been suffering from for years. He left six years later with four league titles and a Champions League winner’s medal. At the age of 41 he had redefined longevity at the elite level.

The Holland player was nearly 33 by the time he joined Chelsea. Brought in by Glenn Hoddle to act as a sweeper, he was soon the team’s midfield fulcrum and helped the club to an FA Cup semi-final. At the end of the season he was named the runner-up in the PFA player of the year awards behind a post-kung fu redemption Eric Cantona. But really, Gullit’s lasting achievements came when he took one step back from the pitch in the summer of 1996 and became Chelsea’s player-manager. He won the FA Cup, signed Zola, Gianluca Vialli, Roberto Di Matteo and Frank Leboeuf and imported a playing style that mirrored Gullit’s panache or, if you prefer, “sexy football”. He was sacked the following February and his next job, at Newcastle, will be best remembered for a tempestuous derby in a torrential downpour. But in 18 months Gullit changed English football forever.

So good he did it twice. A mid-season transfer from Oxford United in 1999 allowed Windass to help Bradford City into the top flight for the first time in 77 years. His top-scoring tally of 10 goals the following year kept them up and earned Windass hero status. Then, eight years later, he somehow managed to do it again. A remarkable volley decided the 2008 Championship play-off final in favour of Hull City, a club that had not played in the top flight for the entirety of its 104-year history. Windass then made only five Premier League appearances (scoring one goal) and generated more headlines for fighting Marlon King in a casino. His legend, however, was secure.

This World Cup and European Championship winner fits in the Klinsmann bracket, coming to the Premier League after stints in Ligue 1, Serie A and the Bundesliga. However the Frenchman was a pioneer in his own way, by choosing to sign for Sam Allardyce’s resolutely unfashionable Bolton Wanderers. Not only did Djorkaeff sign, he did so in the middle of a relegation battle, but his double in a 2-1 win at Charlton kickstarted a dash to safety. That summer Djorkaeff was joined by Ivan Campo and Jay Jay Okocha, and Bolton became a most intriguing symbol of how England’s top flight was changing.

The latest of late bloomers, McAuley did not become a full-time pro until he joined Lincoln City at the age of 25. After two seasons in League Two he served five more in the Championship at Ipswich Town before Roy Hodgson signed him on a free for West Brom. From the age of 32, McAuley’s development has been spectacular. In a league where players are described as burnt out before they have left their 20s, McAuley is one of its best defenders at nigh-on 38. He is also off the back of a historic summer with Northern Ireland (admittedly one that came to an end with his unlucky own goal) and his three goals this season are as many as Riyad Mahrez and Xherdan Shaqiri have managed.

1 Rory McIlroy puts integrity ahead of glory in US PGA second round
2 From Maestro to Mister: Andrea Pirlo named new Juventus boss
3 Sene Naoupu turning mind back to rugby after health scare
4 When Mike Tyson bit Evander Holyfield: 20 years on
5 Fifty years on from Black Power salute: Has anything changed?
Real news has value SUBSCRIBE