Koeman: Everybody at Everton is underperforming, including me 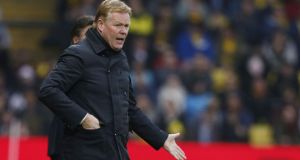 Everton’s manager Ronald Koeman: “If we keep a compact team we can make it difficult for Arsenal.” Photograph: Ian Kington/AFP/Getty Images

Ronald Koeman has described Everton’s run of one win in 10 Premier League matches as unavoidable proof that he and his players are “under-performing”.

Defeat at Watford on Saturday was Everton’s fifth in the last six away games, prompting Koeman to admit his team struggle against physical opposition, and criticism is mounting among supporters at the return under a manager hired on a £6 million(€7.1 million) per annum contract in the summer.

Koeman’s frustrations at Everton’s form were clearly evident during his pre-Arsenal press conference on Monday and he admitted he was acutely aware of the criticism.

“I know most of the opinions,” he said. “If I am an Evertonian, and I am, I am also disappointed at one win out of 10 because that’s not what we need to do. We won’t win every game but one in 10 is under-performing by everybody, including me. But sometimes this kind of situations you need to understand. It’s not an easy answer – fight more, run more. It’s also about quality on the ball.”

The Everton manager has lamented his team’s lack of productivity, aggression and sluggish reactions on a regular basis this season but insists the January transfer window should not be the focus for a solution with Arsenal and Liverpool arriving at Goodison Park in the next week.

He added: “Of course we need to work behind closed doors for the future but the problem is now and if you think too much about January and next summer that is not counting this season. We need to resolve the problem now. It’s all about the commitment of the players – bring your quality in the team. We have spoken about that to get a better run of results but you don’t have time. We all know the fixtures coming up.

“Every week we have several meetings about this and it’s more normal in difficult situations. That was good but finally the answer is on the pitch and not between four walls in a meeting room.”

Despite the poor away record, Everton are unbeaten at home in the Premier League this season and their manager expects a different challenge against Arsene Wenger’s side.

“Arsenal are different to Watford. They have world-class players and we know what we have to do,” said Koeman. “If we keep a compact team we can make it difficult. This Arsenal is better than it was. I had the experience of beating them several times with Southampton but there is more balance between defending and attacking and this season they are one of the favourites to win the title.” Guardian service