‘Now that he’s not playing, he’s helping me a lot in the changing room,’ the manager said 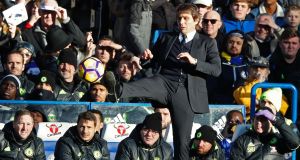 Chelsea boss Antonio Conte has praised the job injured captain John Terry has been doing during their nine-game unbeaten Premier League run — but would not be drawn on his long-term future at the club.

Terry, 36, has been absent with a gluteal strain and has missed the last four games of the Blues’ winning run, which has seen them move three points clear at the top of the table.

Reports on Tuesday morning suggested Terry, whose last start came in the EFL Cup defeat to West Ham in October, will not be offered a fresh deal at the end of the season when his current contract expires.

But it is understood the club are yet to hold any talks or make a decision either way on whether Terry’s time at Stamford Bridge will be extended.

Conte said he has been pleased to have the former England skipper around in recent weeks, even though he has not been playing, but added he would not look beyond the end of the current campaign.

“John is our captain and I think he’s doing a great job when he played,” he said.

“Now that he’s not playing, he’s helping me a lot in the changing room, to send the right message to the players.

“This is fantastic. John loves this club. I think it’s important now to be focused on the moment, and not thinking about the future.

“It’s better to be focused on the present. I don’t like looking a lot forward. But John is able to do a different role in football, but now it’s important to be focused and continue to think about him playing, because we need him.”

Terry will once again be missing when Conte’s side face bottom club Sunderland on Wednesday evening, but he will still travel with the squad as his wide-reaching role within the group continues.

“I’m pleased a lot to know, also, the man and not only the player,” continued Conte.

“I think, I repeat, he’s a really important player for us. If he plays or if he doesn’t play, he remains our captain.

“He’s injured, but he’s helping us in these games, in every game... He comes with us, home and away, staying with us, transferring the right message. It’s very positive, very positive.”

While Terry is out, fellow defender Cesar Azpilicueta is likely to make his 200th appearance for the club at the Stadium of Light.

And the Spain international will head to the north-east with the ink still drying on his own new deal at the club.

The three-and-a-half-year extension will keep Azpilicueta at Stamford Bridge until 2020 after he originally joined the club from Marseille in 2012.

The 27-year-old has lifted the Premier League, EFL Cup and Europa League in his stint at the club and was also named as Chelsea’s Players’ Player of the Year for the 2013/14 campaign.

Azpilicueta has featured in every game under Conte since the Italian’s arrival in the summer and said he was pleased to extend his stay in west London.

“I’m really happy to have signed a new contract,” he told the club’s official website.

“Since I arrived here my target was to progress as a player and win trophies. This new contract gives me the chance to continue my relationship with the club, that’s what I wanted and obviously I’m really happy here.

“We’ve had some really good moments so far this season. From day one, we started working very hard.

”We have a new manager with new ideas and I’m really happy to be working with him. Obviously we can still improve but the long-term aim for us is to win trophies, that is what we all want, the players, manager and fans.”

Conte praised Azpilicueta’s work ethic and believes his extension is a good thing for everyone involved with the club.

“He’s impressed me a lot with his commitment, his work-rate, his ability to play also in different roles.

“He’s a good professional and I’m pleased for him, and above all the club and the fans. A really good player has signed.”