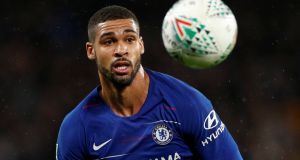 Chelsea have ruled out sending Ruben Loftus-Cheek on loan in January after the England midfielder’s recent impressive form but the club are considering the futures of Michy Batshuayi and Tammy Abraham before the transfer window.

Loftus-Cheek has still started only once in the Premier League this season but has been involved in all seven of Chelsea’s matches in all competitions since the end of November and has demonstrated clear improvements with increased playing time. A number of clubs, including Crystal Palace and West Ham, had been monitoring the 22-year-old’s situation with a view to submitting a loan offer but Maurizio Sarri now considers Loftus-Cheek a key member of his first-team squad.

“Ruben is a very good player and, potentially, he’s a great player,” Sarri said. “He’s improving a lot from the tactical point of view. In future, he will be a midfielder but sometimes we need to use him as a winger, especially in the last part of matches with his physical impact. So he’s a very important player for us. In the future, he will be more than important.”

Palace, who are seeking to add at least one striker to their ranks next month, despite Christian Benteke targeting a return from injury just after Christmas, are one of those clubs who have been made aware of Batshuayi’s availability after he fell out of favour at his current loan side, Valencia. While the 25-year-old is happy with life in Spain, Valencia would not object to the early termination of his loan and Batshuayi may welcome more regular playing time elsewhere.

Abraham, in contrast, has excelled at Aston Villa after joining them on deadline day in August and has 12 goals in 16 Championship appearances. Chelsea would be due a significant payment from Villa should the striker help them to promotion this season.Victor Moses, Gary Cahill and Danny Drinkwater are also expected to depart Stamford Bridge next month.