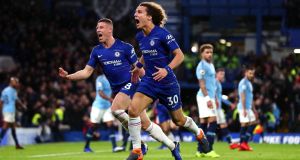 Chelsea inflicted Manchester City’s first defeat of the season in a compelling contest at Stamford Bridge.

Strikers were conspicuous by their absence, with Chelsea’s Eden Hazard and City’s Raheem Sterling deployed in the ‘false nine’ position, and the hosts absorbed repeated pressure from Pep Guardiola’s men before earning a 2-0 win.

Infrequent goalscorer N’Golo Kante gave Chelsea the lead on the stroke of half-time, completing a devastating counter-attack by scoring with the Blues’ first shot of the game, and David Luiz headed in a second 12 minutes from time.

Chelsea had lost to Tottenham and Wolves in their prior three league games, with many anticipating a heavy defeat to City.

Maurizio Sarri either was not aware or did not take heed of Hazard’s comments after Chelsea’s loss at the Etihad Stadium in March.

Antonio Conte, Sarri’s predecessor, had asked Hazard to play as a ‘false nine’ and afterwards the Belgian expressed his frustration.

Sarri explained his deployment of Hazard, without a goal in 11 matches for club and country, was for “faster football”, only it was City who were half a second ahead.

The intensity of City’s press and the comparison with Chelsea’s meant the visitors dominated possession from the start and hemmed their hosts in their own half.

City should have led after nine minutes. Fernandinho won the ball off Jorginho, Sterling surged forwards and played it left for David Silva.

The ball was pulled back for Sterling, but, seeking a goal on his 24th birthday, he snatched at the chance, shooting straight at Kepa Arrizabalaga.

City seemed happy to keep the pressure on and bide their time, waiting for a Chelsea mistake, but Luiz, Antonio Rudiger and Cesar Azpilicueta were superb in defence.

Luiz blocked as Leroy Sane shaped to shoot after drifting from left to right and Chelsea were struggling to escape their own half.

Hazard after 20 minutes gestured towards the touchline, appearing unhappy at being asked to press the City defence more closely. Sarri voiced his frustrations with Hazard, too.

City had another opportunity. Sterling sauntered by Marcos Alonso down the left and the ball found its way to Sane, whose effort was blocked by Azpilicueta.

Chelsea then struck on the counter-attack. Luiz’s long ball found Pedro, whose cross-field ball to Willian did not create the intended shooting chance.

Willian found Hazard, who slid the ball through for the late-arriving Kante to blast in for his second league goal of the season.

Willian had two chances early in the second half. Ederson parried Willian’s free-kick after Fernandinho’s mis-timed challenge on the Chelsea forward.

And Willian shot weakly at the City goalkeeper soon afterwards after Kante’s fine run and pass.

Guardiola reacted, sending on Gabriel Jesus for Sane, and his team pressed Chelsea deep into their own half once more.

Still Chelsea would not relent. A Kyle Walker free-kick was saved by Kepa after Hazard was penalised for handball.

Pedro dragged a shot at Ederson on a rare foray forwards and Chelsea continued to stand firm — before scoring a second.

Substitute Ross Barkley’s shot went wide and a corner was awarded, although television replays later suggested there was no deflection and it should have been a goal kick.

Hazard’s inswinging set-piece was met by Luiz, who rose highest to send a looping header into the far corner of the net.

Barkley headed wide for Chelsea and Fernandinho fired off target for City before Jesus was denied by Kepa in stoppage time.