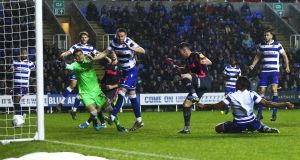 Leeds went top of the Championship after a late goal from Jack Harrison secured a 1-0 win at Reading.

Marcelo Bielsa’s side chalked up a fourth straight win, and made it seven matches without defeat, to move a point clear of West Brom, who have played a game less.

Leeds saw an effort from Stuart Dallas hit the crossbar just after the hour.

Then, with only three minutes left, Leeds went on a swift counter, with Helder Costa’s deflected cross headed in by Harrison at the far post.

Fulham are up to third after a 3-0 home win over Derby.

Bobby Decordova-Reid put the Cottagers in front early on and Aleksandar Mitrovic, the Championship’s leading scorer, headed in a second just before the break for a 13th league goal.

Tom Cairney scored Fulham’s third in the 89th minute as the Rams slumped to a fourth straight away defeat.

New Cardiff boss Neil Harris claimed a 1-0 victory over strugglers Stoke from his first home match in charge with a goal from Leandro Bacuna after 11 minutes.

Luton moved out of the bottom three after coming from behind to beat Charlton 2-1.

The Addicks went in front after seven minutes through Jonathan Leko.

Pelly Ruddock Mpanzu equalised in the 19th minute – despite protests for an offside in the build-up. Izzy Brown, on loan from Chelsea, turned the match around early in the second half.

Huddersfield finished with 10 men as they drew 1-1 with Swansea at the John Smith’s Stadium.

Jay Fulton had given the visitors the lead in the 18th minute, but Karlan Grant levelled matters shortly before half-time.

Huddersfield had Trevoh Chalobah sent off for violent conduct after pushing his head into George Byers’s face following a challenge between the pair.

Millwall fought back to draw 2-2 against Wigan.

The Latics went ahead through Ireland international Anthony Pilkington after just three minutes, but Shaun Hutchinson headed in an equaliser from a corner.

Antonee Robinson made it 2-1 after 56 minutes, but Wigan’s lead was short-lived as Matt Smith levelled on the hour.

1 Born to ride, born to win: Sam Bennett, the making of a green machine
2 Saracens’ emphatic opening salvo enough to keep Leinster at bay
3 Next stop the Champs-Elysées in green for Sam Bennett
4 Garry Ringrose: Leinster’s defeat to Saracens is ‘heartbeaking’
5 Keith Duggan: Surreal story of John Delaney needs to act as a wake-up call for FAI
Real news has value SUBSCRIBE