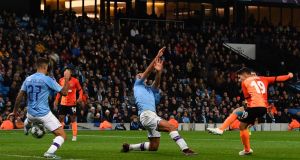 Manchester City are through to the last 16 as group winners despite another of the stuttering displays that have been a feature of their season.

Pep Guardiola’s side were never at ease against a technically bright Shakhtar, though progression with a game to spare is impressive and the manager will worry about form in the competition when the business end starts in the spring.

As expected Gabriel Jesus began at centre forward, one of five changes made by Guardiola, as his team took on opponents beaten 6-0 in the corresponding fixture of last year’s group stage.

City have been shaky recently as the long-term injury loss of Aymeric Laporte affects a defence that is the weakest part of Guardiola’s side. Yet a sign of the Catalan’s confidence could be found with Riyad Mahrez, often City’s X-factor this season, starting on the bench.

After a low-key start they began probing via Bernardo Silva and Rodri along the right. This would be the wing from where Kevin De Bruyne fired a low cross towards Jesus and when the ball arrived at Ilkay Gündogan he should have scored.

Now came a rarity: an Ederson howler. The goalkeeper rushed out and completely missed a clearance and so Tetê ran clear. The shot, from an angle down the Shakhtar Donetsk right, was heading in before Fernandinho cleared, the Brazilian saving his compatriot’s blushes.

When a similar ball was hit seconds later this time Fernandinho had been sucked in and Viktor Kovalenko’s pass beat the defence. Again Tetê was the target and this time Ederson made no error, hoofing clear.

The passage pointed to the problems City have at the back. Their visitors sensed this and were pinging the ball into each other and around the sky-blue shirts impressively. When Rodri strode forward and tested Andriy Pyatov from distance this was City’s first effort on target, 25 minutes in. Guardiola’s men were just not dominating the ball, as they also failed to do against Chelsea here in Saturday’s win.

Better was a fluid move that started with Silva near halfway and ended with João Cancelo on the ball inside the Shakhtar area. His delivery, though, disappointed. So, too, the lack of marking when Ukraine’s champions roved forward moments later. This meant that Alan Patrick had yards of space in front of Ederson to take aim but the midfielder lacked composure and blasted over.

The game had as open a feel as the Chelsea one. The end-to-end stuff next featured a City corner that went to Gündogan, then Angeliño. The left back swung the ball in and found Nicolás Otamendi’s head but Pyatov was not beaten.

If this frustrated Guardiola his counterpart, Luís Castro, was visibly peeved when Júnior Moraes was slow to anticipate a dinked ball, Shakhtar’s coach slumping in his seat.

Lacking from City through this opening period was the verve and vibrancy that has allowed them to dominate domestically the past two seasons. De Bruyne’s display was illustrative. There were flashes of his class but no decisive contribution. Even when dribbling into the area, as half-time neared, the Belgian contrived to trip over his feet.

With the game goalless City were heading for the point required for qualification. The Guardiola way is to go for victory, of course. And his side’s first act of the second half featured Raheem Sterling standing the ball up from the left but Jesus’s header lacked the requisite power.

There was more urgency, though. De Bruyne whipped in a cross and claimed a corner. He took this quickly as Silva then did another from the opposite side. The pressure told. Finally, City had the breakthrough. Despite being surrounded by orange shirts around the penalty spot when Jesus was found by De Bruyne, he somehow swivelled and passed to Gündogan and he made no mistake.

City were cruising towards qualification but this was not yet comfortable. Castro’s move was to swap Yevhen Konoplyanka for Manor Solomon and an instant dividend was yielded. The Israeli had been on four minutes when ghosting to the far post and finishing Dodô’s cross, City’s rearguard again missing in action. – Guardian