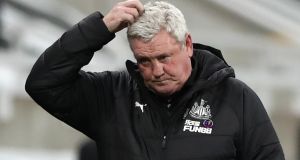 Newcastle manager Steve Bruce: “But, like I say, the gloves are off now. I’m going to do things the way I see fit. We’ll do it my way.” Photograph: Scott Heppell/PA Wire

Steve Bruce has effectively declared war on his Newcastle United players after revealing he is no longer prepared to accommodate their tactical demands.

“I’ve let them be comfortable. But, like I say, the gloves are off now, and we will do it my way. We’ve played a certain way to try to get the results we need,” said Bruce, as he continued to face a barrage of criticism on Tyneside following Tuesday’s immensely disappointing 1-0 defeat at Sheffield United.

“We were absolutely frigging hopeless the other night; we were absolutely shite. Unfortunately that’s happened a little too often in my 18 months here; it was nowhere near good enough for the challenge ahead. Maybe it’s a mentality thing.”

Deconstructing players so publicly is a rare, high-risk managerial strategy, but Bruce is clearly at the end of his tether. The Newcastle manager’s desire to shift to a back four is at the heart of tensions within a squad in which a majority of players are keen to stick with the back-five system devised by Bruce’s predecessor Rafael Benítez. Only last month a delegation of senior professionals asked to return to a default formation Benítez felt camouflaged a collective lack of central defensive pace.

“It [changing to a back four] is something I’ve toyed with since I’ve been at the club,” said Bruce, whose side travel to Arsenal on Monday night seeking to end a run of eight games without a win.

“For me to change things is sometimes difficult for the players. We all like being comfortable. We’ve played a certain way in the past to try to make sure we get the results we need. But, like I say, the gloves are off now. I’m going to do things the way I see fit. We’ll do it my way.”

As a lifelong Newcastle fan he sympathises with at least some of his critics.

“If you’re a Premier League manager you can’t accept what happened at Sheffield United. We were completely and utterly hopeless, and I have to accept what’s coming my way. If I was a supporter I’d be concerned.”

Newcastle are 15th in the Premier League, with 19 points, but mounting fears that they could be dragged into a relegation skirmish have been exacerbated by their penchant for frequently struggling against teams they are tipped to beat.

“Our worst performances have certainly been when we’re expected to win,” acknowledged Bruce, questioning his squad’s mindset. “We struggle with being the favourites. I think it’s a mentality thing we have to change. We were nowhere near good enough against Sheffield United or, unfortunately, against Brentford in the Carabao Cup quarter-final.

“We’ve thrown that hand grenade in too often, and that’s what we have to erase. It’s the disappointing thing I’m going to have to improve.”

Accordingly the 60-year-old does not anticipate any assurances that his job is secure from the club’s owner, Mike Ashley.

“I wouldn’t expect to be reassured after the other night,” said Bruce. “I pick the team, I got it wrong, and I have to take responsibility. I don’t want reassurances. I understand it’s nowhere near good enough, so let’s get ready for the challenge ahead.”

Even so, he remains convinced he is still the right man for the job.

“If you look at my record over the years, I’ve got enough on my CV to make sure I can slowly take the club forward. Some would argue against that. I accept that. In some people’s eyes I was never the right choice. I understand that.”

After his team’s failure to score in their past 10 hours of playing time, Bruce has not been greatly concerned by the new protocols on player celebrations. “I’d like to score a goal first. We can worry about it then.”