Fernandes not bothered by Klopp’s complaints about United penalty count 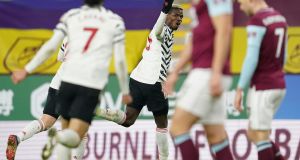 Paul Pogba of Manchester United celebrates scoring the winner against Burnley which put them top of the league. Photo: Jon Super/EPA

Jürgen Klopp believes Liverpool’s players have shown renewed focus for Sunday’s top-of-the-table showdown with Manchester United after a team meeting in the wake of last week’s defeat at Southampton.

The champions have picked up only 13 points from eight league matches starting with the draw at Brighton in November – a run that has allowed Ole Gunnar Solskjær’s side to seize the initiative in the title race. As Klopp prepared for his 200th Premier League game, he revealed his side’s determination to make up for recent struggles.

“We lost against Southampton a week or so ago which was absolutely not what we wanted, but the next day we had a meeting and the boys had their say as well,” Liverpool’s manager said.

Klopp has guided Liverpool to 127 wins – a ratio bettered only by José Mourinho in the Premier League era. Yet he admitted his players must “go back to basics” to regain form against a United side unbeaten in 11 league matches.

“Yes, we are not exactly where we want to be but we have learned a lot this season. We are dealing with circumstances, dealing with situations and all of these kind of things and there was not one second because of the attitude of the boys it didn’t work out. So that’s good but it causes a problem as well because they have always won but it doesn’t work out all the time.

“We didn’t score a lot of goals in the draws and we didn’t score against Southampton but still we have scored the most goals in the league, so that’s absolutely crazy. So it’s not that it disappeared. It’s just exactly how it should be – why would one team click all the time and the other teams not? We have to go back to the basics and get strong. As strong we can be again.”

At this stage last season United were 24 points behind Liverpool. They have emerged as potential challengers despite losing two of their first three matches, and Klopp dismissed the suggestion that Liverpool’s historic rivals are underdogs.

“I’ve been in England for five years and United was never an underdog – they cannot be; it’s just like this,” he said. “They have always had good players and coaches – all of that stuff was always there. And now they are top of the league.

“That’s how it is. But who is the favourite and who is the challenger is not important. It’s Liverpool against United and that itself is a massive game. Wherever I would be in the world if it was on television, I would watch it. This is the game.”

Meanwhile, Bruno Fernandes has told Klopp to continue to complain if he wishes about the number of penalties United win because the midfielder could not care less about the Liverpool manager’s view.

Since Solskjær became manager two years ago United have been awarded 42 penalties and Liverpool 19, and this season’s tally is 6-5 in United’s favour. Klopp recently stated that under Solskjær United had won more spot-kicks than Liverpool had across his five years in charge, although in fact his tally is 46.

Klopp’s comments followed similar ones from Tottenham’s José Mourinho and Chelsea’s Frank Lampard. Fernandes, as United’s penalty taker, has scored 14 out of 15.

“People can talk and say what they want,” he said. “But, for me and the team, the main point is continuing to do the right things and when we get a penalty, scoring.

“I don’t hear, I don’t care, honestly. You always see what people say but I really don’t care. I’m not focused on what they are saying.

“I played in Portugal and when you play for Sporting, Benfica and Porto are always talking about that kind of stuff – sometimes to put pressure on the referee, sometimes just to make some noise in the press. But, for me, the main point is when we have a penalty, if I go to take the ball to the penalty spot, I have to do my job.

“One thing I saw in the news the other day was that Raheem Sterling has missed his last three penalties [for Manchester City]. So, yes, it shows it’s not as easy to take a penalty as people say. You have to work on that, you have to be focused, you have to do your job. It’s clear like that. It doesn’t mean Raheem Sterling is not a good penalty taker because he missed three in a row. It can happen.

“It could maybe happen to me but the important thing is to score and not to listen to what people say because penalties are part of the game, for everyone.” – Guardian