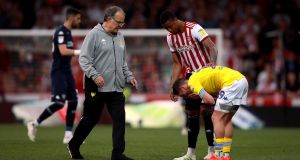 Leeds United have spent 32 weeks in the automatic promotion places this season, but unless something remarkable happens in the last two, they will spend the most important week just outside.

This 2-0 defeat to Brentford was their second loss in four days, putting them three points behind second-placed Sheffield United and, because of a significant goal difference gap, realistically means they need the Blades to slip up in both of their remaining games. Given one of those is against Ipswich, it doesn’t look good. It also let Norwich off the hook a little: the Canaries now require just a point from their remaining two games to go up, after disappointingly drawing their last four.

Marcelo Bielsa bristles at the suggest that his teams fade throughout the season, a consequence of his significant physical demands, but they looked heavy of leg and foggy of mind at Griffin Park. The home side made their league position of 15th look absurd by picking off Leeds with a pair of fine goals from Sergi Canos and Neal Maupay in either half: a lost season for them, but they didn’t play like it.

As things stand, Leeds would face old friends Derby and Frank Lampard in the play-off semi-finals: after ‘Spygate’ that’s good news for anyone who enjoys needle and narrative, and even better news for fence-erectors in the east Midlands.

It all started pretty positively for Leeds, and they didn’t initially play like a side under pressure. By the second minute Leeds basically had five players in attack, four midfielders looking like their job was to make sure centre-forward Patrick Bamford didn’t get lonely, and when converted winger Ezgjan Alioski was injured in the 15th minute, Bielsa brought on winger Stuart Dallas to replace him at left-back.

Brentford had a couple of shots from distance that threatened fans in the away end more than the goal, but Leeds should have been at least one ahead in the opening half an hour. Tyler Roberts was set free on goal but a heavy touch allowed keeper Luke Daniels to snuff the chance out, while Bamford was mystifyingly denied a penalty when tripped by Julian Jeanvier, referee Keith Stroud yards away but unreceptive. Bielsa sat unmoved on his upturned bucket, hands wringing in the manner of a man who hasn’t relaxed in decades.

Leeds had more of the ball but couldn’t create any clear chances. Bamford was having one of those games when his loping stride made him look disinterested, and they nearly fell behind when Canos skipped past three defenders to set up Rico Henry, whose low effort was blocked, then Canos himself cut in rapidly from the right and forced Kiko Casilla to paw his effort away from the top corner.

Then, seconds before the break, they were behind. Maupay found a gap between the Leeds centre-backs you could sail an oil tanker through, collected a through ball from Canos and spanked it past Casilla. Brentford are in theory a better side than their performances this season, and players like Maupay and Canos are why: at least one is likely to be sold in the summer.

Leeds attacked straight away after the break, Daniels tipping a Dallas shot over the bar while plenty were still returning to their seats. Bamford, a little more lively in the second-half, had half a chance, Mateusz Klich shot over from outside the area, and their bubble of confidence grew.

But from virtually nowhere that bubble was burst, and Brentford doubled their lead. Marley Watkins nutmegged Pontus Jansson then fed Maupay, who in turn found Canos, and he clipped it over Casilla. ‘Leeds, Leeds are falling apart again,’ sang the home fans, while one man of some vintage removed his shirt and twirled it around his head, then gave a steward a peck on the cheek when asked to stop.

Canos nearly made it three by channeling Ryan Giggs in the 1999 FA Cup semi-final, but the failure of his mazy run through the Leeds defence ultimately didn’t matter. After such a heartening and successful season thus far, Leeds will surely now have to rouse themselves for the playoffs.