Centre back joins for €68m plus a potential €3.6m, with Otamendi going the other way 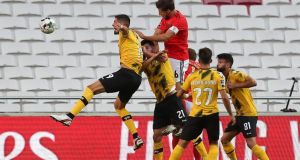 Benfica have announced that they have agreed a deal to sell the centre-back Ruben Dias to Manchester City for €68m plus a potential €3.6m in add-ons. Nicolas Otamendi will join Benfica or a fee of €15m.

Dias, the Portugal international, has agreed a five-year contract with Pep Guardiola’s side, while Otamendi will join Benfica on a three-year deal. The Argentinian leaves City after five seasons at the Etihad Stadium.

Dias will now fly to Manchester to complete a medical and should be unveiled this week. The 23-year-old is a product of Benfica’s academy and has 19 international caps. The defender was named man of the match in Portugal’s 2019 Nations League final victory against the Netherlands.

Guardiola has already recruited Nathan Ake this summer in a bid to strengthen his defence. City had been keen on Napoli’s Kalidou Koulibaly but were unwilling to meet the Italian club’s €80m asking price. On Sunday they lost 5-2 to Leicester City.

Dias’s arrival may mean Eric Garcia is allowed to join Barcelona. The centre-back wants to move with his City contract expiring next summer, and the La Liga side are expected to step up their interest. Jean-Clair Todibo may be sold to raise funds, with Everton and Fulham reportedly interested in the French defender. - Guardian